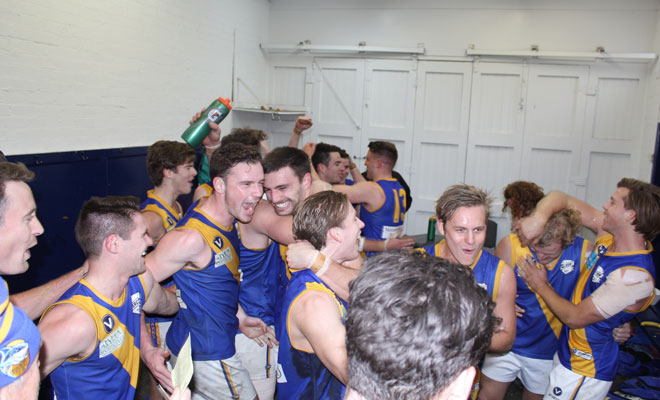 Chris Grigoriadis kicked 3 goals and played one of the classics to help the BFC Seniors record a hard fought win against Premier B ladder leaders Caulfield Grammarians yesterday at Glenhuntly Oval.

Coming off a disappointing loss to St Bedes, the BFC Senior team played inspired team football to push back a few demons that haunted them in the earlier part of the season when inaccuracy in front of goals cost the team a number of victories.

As the line-up of the current squad becomes more settled with each game, the teamwork has become more pronounced and the confidence more visible as a Top 4 finals spot remains in contention.

Even though ‘the Fields’ scored 4 goals in the 3rd Qtr, it was our 5 goals in the same Qtr that set up the match. Grig who was in so many contests, inspiring his teammates along the way, got a mountain of support from his No 1 ruckman Cal ‘Chopper’ Heath who took some amazing defensive marks as Grammarians surged forward trying to gain the advantage in the 2nd half.

It was a tremendous contest between two very committed teams. In the end it was a solitary goal that separated the two clubs.

Our next game is this coming Saturday (3/8) against 2nd placed Old Scotch at Oak St. It looms as the game of the round – 2nd Vs 4th.

You can watch the complete match via these links;