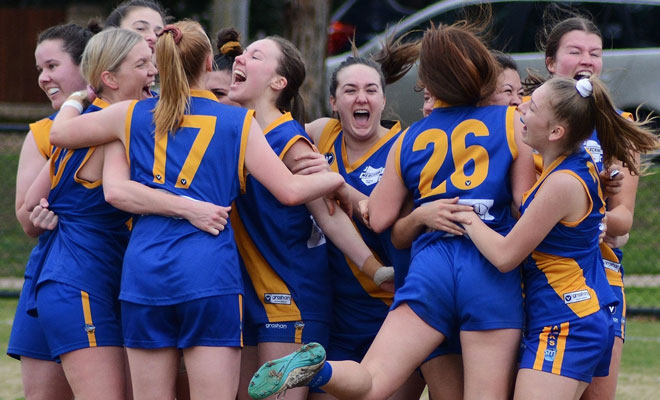 Senior Girls Defy the Odds & Past History to Win Semi.

Our Senior Womens team have done it again, they're into their 3rd Prelim final in 3 years. On Saturday they defeated their arch rival Old Haileybury by two points to progress to next week's game against Old Brighton.

What a victory! Last week Haileybury beat us by 46 points in the final home & away game, but yesterday our girls were on another level.

"After last year’s devastating 2 point loss in the prelim final to this exact team, our girls were out to seek redemption.

Sienna Tedde was dominant in the ruck - running rings around the opposition. With the help of a classy midfield made up of Em Baker, Sam Baisas and Sasha Long the girls started winning the ball at every contest. Nadia Eldred reminded everyone of her seemingly effortless ability to mark the ball and find a teammate. Going into half time, the BFC women’s team were 2 points down but the fight was far from over.

Supporting our midfield was our defenders. Pip Atkins was inspiring down back with her contested marking and ability to get the ball out of our defensive 50. Our key defenders Niamh Stainforth, Emily Vandewater and Lauren Haringsma showed their aggressive attack on the ball which kept Haileybury goalless in the third quarter.

However it was with the accurate kicking of Thea “Snapper” Brown and Danielle Royal which lead our girls into two point victory over our rivals Old Haileybury.

Ellen also paid tribute to the coaches Brent Ward, Darryl Behrendorff and Blake Wadley for the turn around.

Once we know where the weekend's final is we'll let you know.

In the meantime, let's savour this outstanding victory and support these girls this coming weekend against Old Brighton. We can do this!