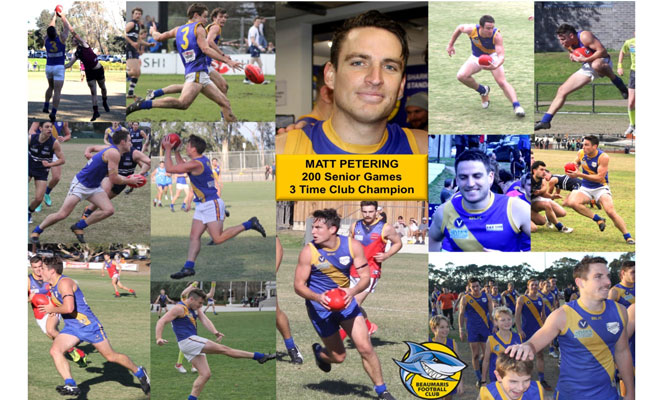 In the past ten or so years it's hard to imagine this club without the name Matt Petering in the lineup; the two are indelibly linked. In fact Matt Petering's name is known all round the League as the player you must stop when you play Beaumaris.

He's had that tag since the U19s Grand Final win in 2008 when he played a starring role.

Since then he's been a regular in our Seniors and will notch up his 200th game for the Senior section of the club on Saturday.

Saturday night after the Fitzroy game will be a time for celebration and reflection for many at the club who have enjoyed the ups and downs of the footy journey playing with Matt.

For those of us who have had the opportunity to watch Matt play and be enthralled by his skills and his incredible courage will see this day as recognition for arguably the best player to wear the 'Blue & Gold'. That's a point we'll all enjoy discussing in the years to come.

For the record Matt is a three time Club Champion, has three BFC VAFA Premierships, is the current Club Captain and has kicked 279 goals. But that doesn't tell the full story... he is loyal, and tremendously proud of our Club. It doesn't tell you how many times he has played with injuries or the number of times he's dragged himself out of a mud heap at Oak St to contest another centre bounce when his body says the complete opposite.

For those who know Matt will tell you he rarely talks about himself, in fact he is humble to a fault. He'd rather tell you how well one the younger players are going or the Senior Womens team, which he is a strong supporter of.

And Matt...don't even think about hanging up those boots yet.

(Catch Matt Petering's 200th game this Saturday 31st against Old Fitzroy at 2pm to be followed by the BIG BEAUY PHOTO.)