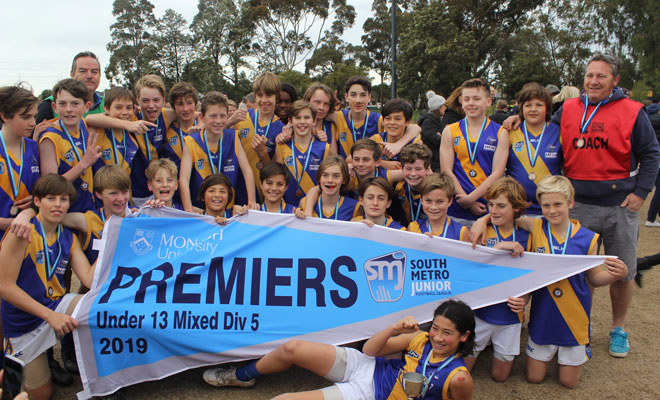 In gusty conditions at Le Page Park on Sunday, our U13 Great Whites boys delivered a well deserved Premiership for the Club.

Coach Ben Stainforth, who is a real character around the club, brought together a team that was "a bit of a rabble" at the start of the season to a SMJFL Premiership and today they did it in style coming from 14 points down at Qtr time to record a memorable Grand Final win defeating East Sandy 2-5:17 to 3-6:24.

The effort was more noteworthy by the fact that after Qtr time we allowed the opposition to score only 3 more points for the whole game and that defensive effort was led by Seb Miller and Cooper Cairnes Dickson who were brilliant across the half back line.

Post game the coach was very adamant about the team effort that was on display for the whole game. He was spot on.

We thought Al Hodgkins on a wing and Mawi Mcneish in the midfield were brilliant all day.

Congrats to Mawi who won the Umpires Award for Best on Ground.

Great effort guys. What a victory!