U12 Boys Produce a Classic to Win a Brilliant Premiership! 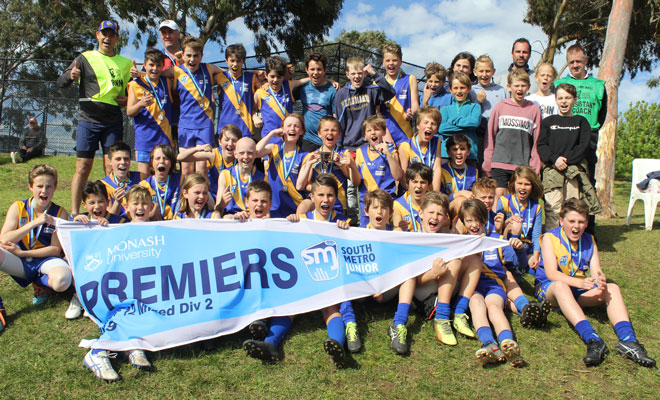 It was a great Grand Final win today by our U12 Sharks who produced an awesome 4 quarters to defeat great rivals Brighton Beach at Essex Reserve. Final scores BFC 8.14-62 def Brighton Beach JFC 0.3-3

If ever you wanted to see a game where every player was relentless for the ball, this was it. It was Beauy footy at its best...(thank you Nashy)

At half time and 3 Qtr time Coach Paul Gleeson didn't have too much to say for fear, 'if it's not broke, don't fix it'....The team were on a mission...this is our premiership!

For Paul this is tremendous reward for all those years running our Auskick program. Out of that group, he's developed this premiership side and help provide a premiership trophy those boys will have forever.

Special mention goes to ALL the boys in the U12s squad who couldn't be on the ground today but were very much part of this years success and part of today's victory.

Congrats to Alex Pittman for his well deserved 'Best on Ground' Award.

Also, we'd like to recognize Alex, Lachlan and Archer who ran water for the Senior teams this season.