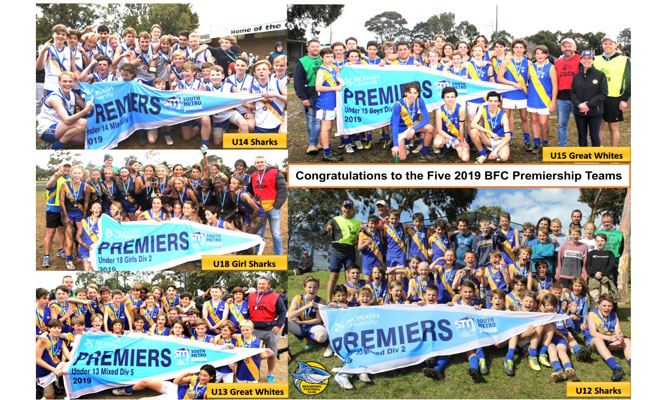 The Club would like to acknowledge the following teams who played Finals Football this year.

A special mention to the 2 Junior teams who lost their Grand Finals last Sunday.
Under 16 Div 1 Boys – these guys had a tremendous season finishing on top of the ladder, progressing straight into the GF after a convincing first Semi Final win, but losing the big one by a mere 5 points. It was a heartbreaking end to a very good season. The final itself was a seesawing affair, which either team could have won - it depended on who was in front when the siren rang. Luck played its role, with a couple of crucial goal line decisions going against us. But credit to East Brighton, they’re a very well-balanced side who took their chances. Hats off to our boys who showed tremendous humility and strength in defeat.
Well done to Coaches Lindsay Bull and Drew Kelly and Team Managers Lee Young and Bill Plevritis. We believe Lee shed a tear in the car on the way home. She probably wasn’t the only one…..

Under 14 Div 2 Girls – This team had a fantastic season, finishing 2nd on the ladder and making the Grand Final via the Preliminary Final. Unfortunately, Port Melbourne claimed the premiership despite a final Qtr surge by our girls lead by Jacinta Boyd who played out of her skin and inspired the girls to get within 13 at one point. Port held on to win by 19 points. But the girls should be very proud of the season they had.
Many thanks to Coach Dean Shipton and TM Fiona Love.
This team is one of a quartet of Girls teams in the U14 age group. Importantly, a significant number of the girls in this age
bracket will still be eligible for U14s footy next year, so the experience generated at this level during the current season will be invaluable next year.

In closing, it's pleasing to note that of the 11 Junior teams to make it through to the finals, 5 won the Grand Final, with 2 runners up. A pretty good strike rate we reckon.