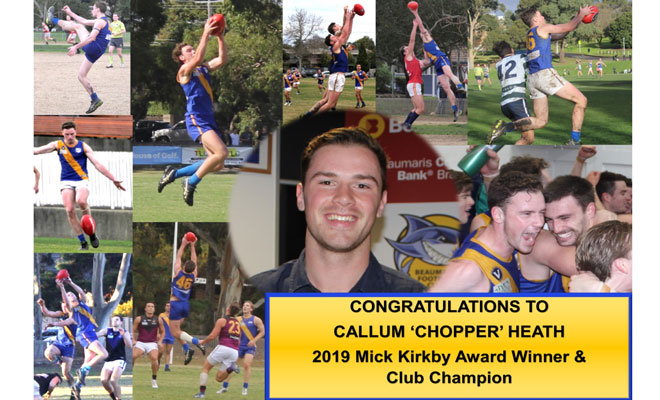 Last Thursday night the Senior section of the Club announced its Best & Fairest Award Winners for 2019.

This involved the Seniors, Reserves, U19s and Senior Womens.

Cal's B&F trophy was presented by Jan Kirkby, wife of the late Mick Kirkby, a legend of the club in whose honour the Club Champion trophy is named.

It was a tremendous reward for Cal, affectionately known as Chopper, who had an amazing season as the club's premier ruckman. Cal's trademark leapt and mark became common place, often repelling the opposition's progress with telling marks down the line or in the centre of the field. His fitness and determination was inspirational and this was matched by his off field demeneour and leadership. Chopper Heath a deserved Club Champion!

Chris Grigoriadis and James Taylor both had great seasons and either one of these boys would have been a worthy winners.

Nick Wall won the DAMIEN GUIDOLIN U19 B & F for an outstanding season while the evergreen Sean Coote was a popular winner of the Reserves B & F.

The Womens B & F was won by Sarah Collins closely followed by Sasha Long.

In other major awards Scott Gower and Sam Basis won the Players Player awrds for the Mens and Womens respectively.

SHARK OF THE YEAR - ZOE LARRIEU

Congratulations to all the winners and GO SHARKS!