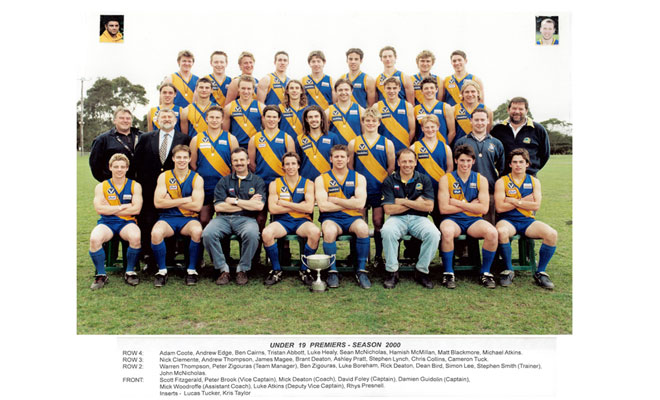 After a twelve month battle with cancer, the BFC’s longest serving U/19 Coach, Mick Deaton, passed away peacefully in his sleep last Friday morning (20/12) leaving behind many friends & admirers within the Shark family. Mick was first and foremost a family man who was devoted to his wife Kerri, their two sons Rick & Brant, and their families, and we pass on our condolences to all members of the Deaton family.

Not only did Mick coach the U/19’s to a famous one point victory over Old Scotch in the 2000 Grand Final, but he also took that group up to Premier A Division and that experience was the basis for many of his players to contribute to the Senior Premiership in 2003 over Collegians. His mentoring of those young men for six years left him with many friends among the colleagues, players and parents that he was involved with during that time.

Before Mick became involved with the Sharks he was a long-time resident of Beaumaris and was well known for his stellar football career with VFA club Mordialloc where he had been a member of their only VFA Premiership team in 1977 (4 GF goals) and later named in the Bloods ‘Team Of The Century’.

Then Mick’s sons started playing juniors with the Sharks and within a couple of years he had become a key member of the Federal Super Rules team based at Oak Street and the Veteran Footballers’ Beauy Cricket Club team and scored Premiership Medallions with both groups alongside his good mate John McNicholas. His passion and drive for sport, especially football, became obvious to everyone and we all knew that he would make a terrific coach when the time came for him to stop playing.

That coincided with Rick and Brant moving up to the U/19 Division and Mick put his hand up to take on the coaching role in 1999 after helping Colin Alexander in 1998. Obviously the highlight of those years was the Grand Final win in 2000 with both Rick and Brant playing in the team. Rick then featured on the Footy Show with his Grand Final ‘speccy’ but unfortunately spent the night in hospital after a nasty collision with a fence sign at Toorak Park.

Rick and Brant both went on to play Senior football with the Sharks and Brant was a member of the 2003 Senior Premiership team which demolished VAFA powerhouse club, Collegians. Mick and Kerri were always great supporters of the club and were very involved in all social activities and Mick leaves behind many friends from the football community, the cricket club and also from his recent days playing bowls with many former Sharks.

There will be a Private Cremation for the family this week.

In late January/early February there will be a celebration/wake held at the Mordialloc Football Club.

(Mick is pictured here with the 2000 U19s Premiership team)