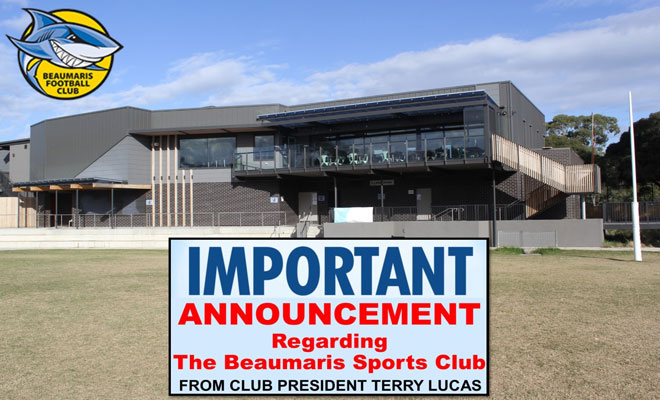 I hope you are all keeping safe and healthy at this very difficult time.  Despite there currently being no footy, I ran into some under 11 boys the other day and their positive outlooks immediately put a smile on my face.  The power of the Shark Community!

I am writing to you today to update you regarding the situation at the Beaumaris Sports Club (“BSC”). Many of you would be aware that the BSC is it’s own separate legal entity, established to raise funds to construct, lease, operate and manage the sporting club facility.  The issues the Beaumaris Football Club (“BFC”) had with this arrangement have been well documented. Despite those difficulties, the BFC, Beaumaris Cricket Club (“BCC”) and the Beaumaris Lawn Tennis Club (“BLTC”) worked tirelessly, together, to try to make the BSC viable.

Unfortunately, due to the recent government enforced closure of the facility, I understand that the BSC has informed the Bayside Council that it can no longer operate as a going concern.

What does that mean?

There are a number of stakeholders that the BSC and Bayside Council will need to have discussions with. It is not my position or the BFC’s responsibility to comment on this.  Some of those stakeholders are our own members so this is a difficult time for many.

However, as President of the BFC, my focus (and that of the Senior and Junior Committees), is what we need to do to ensure we are in a position to operate the facility once the football season resumes.

In simple terms, the BFC, BCC and BLTC will seek to take legal control of the sports club facility and its operations for their respective seasons/areas.

In 2019 the BFC expressed to Bayside Council it’s strong desire to have it’s own lease and liquor license for the football season. The BCC and BLTC also expressed similar intentions for their respective seasons/areas. The three clubs wanted to revert back to the operating model that existed in the old buildings, where volunteers ran the facilities primarily for the benefit of their respective clubs and club members. The Bayside Council could not agree to this at that time as a number of things were being considered to try to provide financial viability to the BSC entity.

Unfortunately, the recent government decision to close sporting facilities due to the COVID -19 crisis has meant that the BSC is no longer viable as it’s own entity.

All three clubs will therefore now be revisiting our 2019 discussions with Bayside Council with the aim of putting new leases and liquor licenses in place before the facility re-opens.

The BFC, BCC and BLTC remain their own independent, viable entities. Obviously we will need the support of all our members, sponsors and the community once the sporting facility re-opens.

The BFC Committees are still working behind the scenes with the view to being ready for the resumption of football. I am delighted that many sponsors have agreed to support us even if we only have a part season. Some have already paid just to help the club at this time. The power of the Shark Community! Then there is people like Doug Pritchard who paid his player sponsor fees to help the club, even while the footy season was suspended.  The power of the Shark Community!

I will keep everyone posted as to any further developments, but am confident that we will reach an agreement with Bayside Council to allow us to operate the sporting facility in football season for the benefit of our club and it’s members.

Your Sincerely  (with a big FINS UP!!)