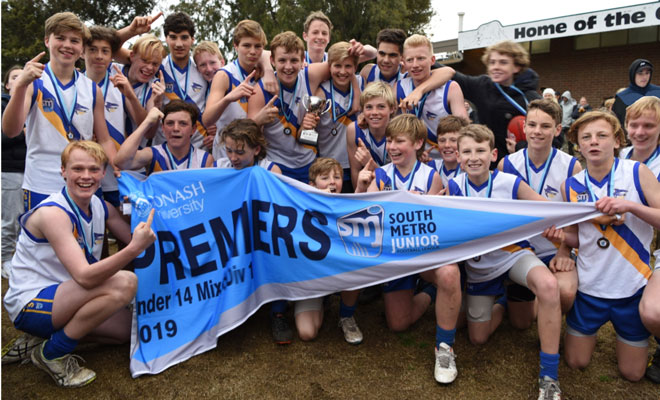 It’s hard when a team is surrounded with expectation. These boys had set the bar very high by playing in the two previous Grand Finals and just missing each time. But now more mature and more seasoned as a group they delivered what they had promised to each other and their coaches and that was an incredible premiership victory on Sunday.

This side is bulging with talent – genuine football skills combined with audacious tenacity. Their Grand Final performance on Sunday against arch rival East Malvern was stunning and daring all rolled up into one.

Coaching Director Steve Nash called it one of the best Grand Final performances he has seen. It’s impossible to argue. The execution of their game plan was almost flawless and their ability to handle pressure and the wet conditions was outstanding.

Coach Mark Butler said this self-belief all started at the very first beach session back in January and from there it just gelled.

In terms of the match itself Jett Butler and Calsher Dear each kicked 2 goals, whilst gun defender Zac Grech deservedly won the ‘Best on Ground’ Umpires Award.

We thought Oscar Newstead was tremendous, closely followed by Will Snowden, captain Charlie Harrop, Will Nish and Daniel Charles.

But this effort was about what the WHOLE TEAM set out to do and how they went about achieving it. Well done boys you have a premiership medal to show for all your hard work and self belief.

Huge thanks also to Anthony Lewis for his amazing photos of the day.

FOOTNOTE on the Under 14s: Special mention to Stu Spencer’s Div 3 side who went out in the Prelim Final last week in a heartbreaking 3 point loss and Simon Shepherd’s Div 4 side, who narrowly missed the finals.

Along with the four U14 Girls teams this is a really strong age group for the club.

Dean Shipton's U14 Div 2 Girls fell just short in a tough GF battle with Port Melbourne on Sunday. They threw everything at Port in the final Qtr, but missed out unfortunately.