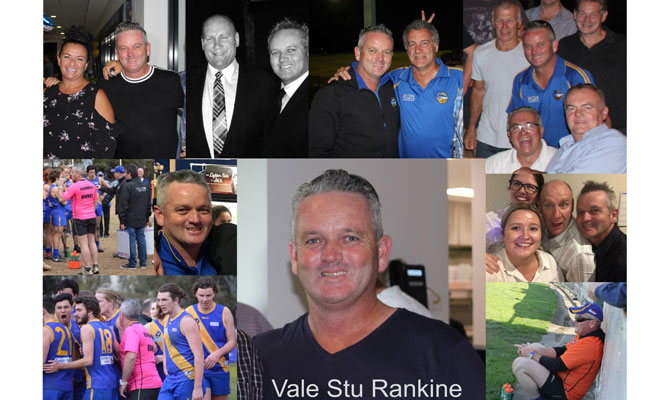 It is with great sadness that we advise the tragic and sudden passing of Stu Rankine on the weekend. Stu was only 48 years old.

Stu was someone known not only to many at the Beaumaris Football Club, but also to the wider Beauy community.

Stuey's association with the Club goes back well over a decade ago when he coached or co-coached a succession of Junior teams. If there was role on offer Stu would invariably put up his hand.

In more recent years he gave up valuable work time on Saturdays to be the 'Runner' for the U19s under then coach Terry Lucas and also ran water when that was needed. He had a genuine love for the club and was only too happy to sponsor players and the club. It's been said that his generosity knew no limits. That was the man he was.

Through his association with 3193 in the Concourse in partnership with his wife Louisa, Stu forged a legion of friendships. He was fun to be around.

Stuey was a lovable, charismatic larrikin, with an infectious smile and a kind heart. He will be sorely missed.

"It is with a very heavy heart that we say goodbye to Stuey Rankine. Stu passed away suddenly on Sunday morning, leaving the Beaumaris community in shock. The world lost a real good one but his achievements and impact on all he touched will never be forgotten.

The BFC extends its deepest sympathy to wife Lou and children Jack and Tay as well as Stu’s parents Ian and Chris.

Stu was a wonderful man, husband, father, son and friend. A true gentleman. He was generous, funny, kind, fiercely loyal and very passionate about everything he loved. He loved the Sharks too.

He was a coach, a runner, a trainer, a dad and a very loyal supporter. His steely eyes on game day showed his desire for the Sharks to get the 4 points. He inspired players young and old to play their best, to attack the ball and to not give the opposition an inch.

Stu was a great friend to many at the Sharks. I personally will miss him very much. We all will. I had the pleasure of having Stu as my runner when I coached. He was incredibly passionate about the playing group. He would do anything for them, whether it was the under 11s, or in later times, the under 19s. He ran for me in the Under 19s even though his kids weren’t in the team. He just wanted to be involved, to put others before himself. The players loved him.

Stuey was a great clubman on game day, and a great supporter off the field as well. He was always the first to shout a drink and he loved singing the team song with the boys.

I want to share a couple of stories about Stuey on game day. He was such a character. One game I asked him to give a stern message to one of the players. Out he ran. He put his arm around the player and delivered the message. “Did you tell him mate”? I asked. “yes Tez, I let him know” was the reply. The particular player had a great game so I checked in after the game. I asked what Stu had said to him. The response was typical of Stuey Rankine. He didn’t’ deliver the stern words, he simply told the young man he was going well and keep on having a go. That was Stu, full of positivity and love for the players. They loved him and so did we.

Another time I sent Stuey out to deliver a message and he actually intercepted the footy and gave it to one of our players. He came back with that infectious grin. “Sorry Tez, I just couldn’t help myself”. How could you not love that.

The BFC has lost one of it’s real good ones. The players that came in to contact with Stuey are hurting, as are many of the BFC supporters. At the right time (when restrictions are removed) we will farewell Stuey appropriately. For now we will have to pay our respects in our own way, and make sure we are there for Lou, Jack, Tay, Ian and Chris.