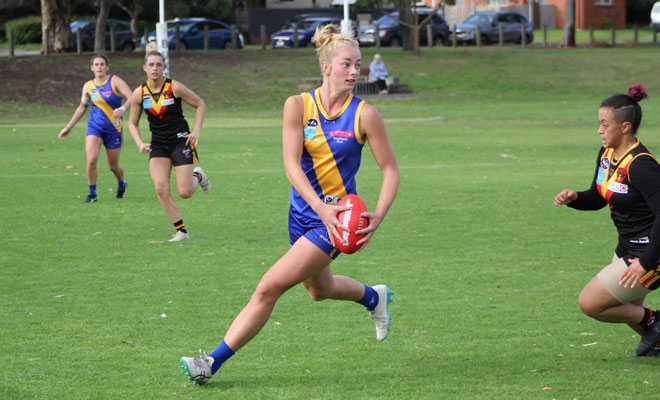 It was a tremendous day for our Senior Mens & Womens (Firsts and Reserves) with all 4 teams winning.

Prior to the main game, the two Senior Mens teams joined the Ajax players and supporters in Yom Ha Shoah or the Holocaust Memorial Day commemoration. It was a special moment.

Against the backdrop of the city skyline at the Ajax home ground in Albert Park, our Seniors backed up a good win by the Reserves with a solid win against our great rivals.

Following on from his tremendous game against Williamstown, Ben Mathews used his speed to such an advantage in an inspired performance on a wing to be our best on ground. Riley Virtue proved what a gun midfielder he is with another great game out of the middle. Chris Grigoriadis is relishing the move to the forward line with another 3 goals. Scott Gower and Jackson Voss might have a few years between them in age, but they were on the same page in this game, with Scott turning back the clock with a classic defensive performance, while Vossy was tremendous across the whole park, kicking an important goal in the process.

A tremendous day all round for the Senior teams.