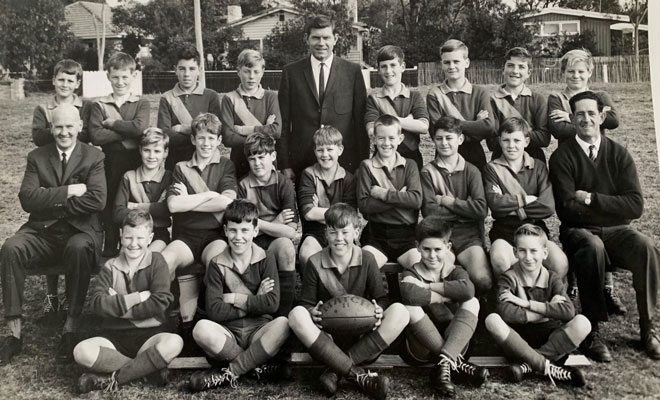 A Most Significant Day Ahead

On October 17th 2017 the 100th Anniversary of the Australian Light Horse cavalry charge against the Turkish guns at Beersheeba coincided with the 75th Anniversary of the heroic defence of the Kokoda Trail against a Japanese invasion force. At the Australian War Memorial in Canberra four pillars were dedicated to what was seen as the core values of the Australian Infantry Force – “Courage, Endurance, Sacrifice & Mateship” – displayed since the inception of the AIF more than one hundred years earlier.

The heritage of these AIF values was passed on when a group of Returned Servicemen & Women from the Beaumaris RSL were instrumental in the formation of the Beaumaris Football Club over the spring and summer of 1962. Their Legacy was to form a club that inherited these values from the outset along with a sense of fairness, inclusiveness and respect that has permeated down through the decades and led to the creation of a great community club.

When they came home these individuals got on with their lives and then put their hands up to form a very vibrant and social RSL Club in Beaumaris which later on led to the founding of the Beauy Sharks at two public meetings held at the RSL clubrooms in 1962.

It is no surprise when we consider the legacy that these individuals have passed on to the following generations that the club has turned out so well and has once again shown an enormous amount of resilience in rebounding so strongly from the setbacks of the past three years.

Every few years we get the opportunity to honour this legacy and recognise our heritage and next Saturday, April 24th, there is a joint Anzac Luncheon and Flag Raising ceremony to be conducted by the Beauy RSL & Football Clubs at our Oak Street clubrooms prior to the main game against local rival Parkdale. The Beaumaris RSL Sub-branch contains nine living members who served in WW2 and many from all AIF campaigns since and we will be hearing a few words from one of their members.

This is an enormous opportunity for the club to regroup at our first luncheon in eighteen months and to recognise our legacy and our debt to these past generations in conjunction with two other local community organisations. The new VAFA rules mean that we can have lunch and then gather outside with the four Senior & Reserves teams, umpires and spectators for the Last Post and Raising of the Flag before reconvening in the social club until half-time.

The time-honoured tradition of conducting a game of Two-Up will also be held after the main game.

A reminder that the two clubs will be again be competing for the Macgeorge Cup in honour of Beauy’s former Senior Captain-Coach, Peter Macgeorge, and his sons, Tony & David, who both played Senior footy with Beauy before Tony led Parkdale to a Senior Premiership as Captain-Coach.

Or pay directly into the club bank account as per the instructions on the flyer below.

As it was in 1963 the club’s primary aim was to put as many teams on the park as was needed to accommodate all of the young men & women, boys and girls from the local community who were wanting to wear the Blue & Gold in 2021 following the pandemic lockdown.

With seven Senior teams in the VAFA - two each of Senior & Reserves Men’s, Women’s & U/19 teams plus a Men’s Thirds side – and thirty-six Under-age Boys (26) & Girls (10) teams we can safely say that all expectations have been exceeded and a great deal of constructive work has been carried out by our dedicated volunteers in order to see forty-three teams take the field each week.

Even more exciting is the results that see our Men’s Senior & Reserves teams and the Women’s Senior team all undefeated and sitting on top of their respective ladders. The brand of football being played by the Seniors at the moment is very exciting – dominant in the air, quick hands and ball movement with plenty of run all make for a very enjoyable experience for the growing band of supporters who are following this team through 2021. With a forward line boasting four big targets in Chris Grigoriadis, Joel Cusack, Sam Gibbins & Kyle Yorke the goals are being shared around but Grigga is leading the way with seven majors so far. Lewis Diggins is in superb form in the centre and the ruck/midfielders of Heath, Courtney, Virtue & Voss are driving the centre clearances while Gower & Linehan lead the very safe hands in the backline.

Some Key Dates to Remember

The cs entered At this stage all