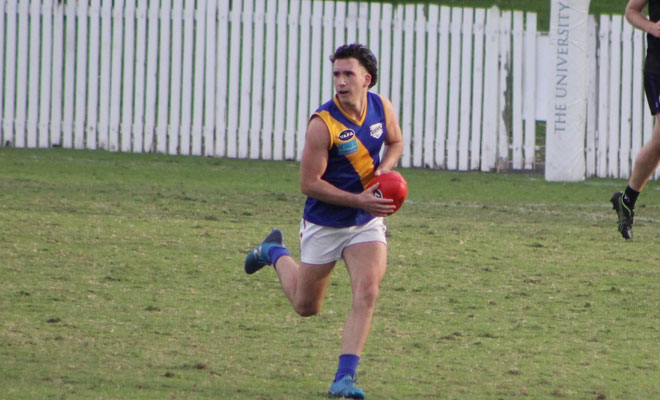 In what may be a precursor for things to come later in the season, the top of the ladder clash between our Seniors and Uni Blacks lived up to all expectations in what was a finals type contest. Final score: Blacks 7.10-52 - BFC 6.11-47

Every possession was hard fought and Uni Blacks threw everything at us. This is a hardened team with a spirited mindset who pursued every contest with an innate ferocity.

However, their determination to win this year's premiership is wholeheartedly matched by ours. The 5 point margin could have swung either way at the end and there's no doubt the return game at Oak st will be something really special to look forward to. (Round 17, 21st August)

For our players there were lots of positives to come out of the game, importantly there was never a point where the game got away from us, in fact with an once of luck we could have won the game.

For us the three standout out players were key defender Scott Gower, who nullified the Blacks goal kicking ace Alastair Robbins and kept him scoreless, Chopper Heath who was tireless and dominant in the ruck all game and Connor Murphy who played his best game for the season from his wing, often finding clear air and delivering pin point disposals. Special mentions to Sam Gibbins, Lewis Diggins and Chris Grigoriadis.

Special mention also to Tom Spencer, who delivered a tremendous first Seniors game for the club. Tom is another former gun junior and more recently the U19s Prem captain. After an anxious start Tom found his niche and was really impressive after half time using his speed to advantage.

Next Saturday our Seniors play away to De La Salle, who come off a good win to Fitzroy.

Well done to our Senior boys on a tremendous effort.