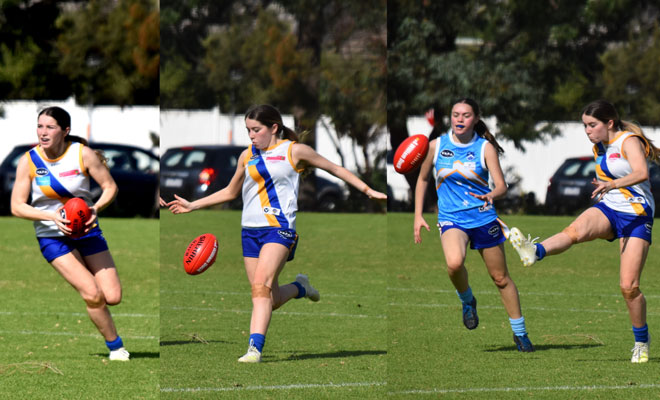 The Senior Womens Team posted another tremendous victory on Saturday with a great win over Monash Uni. (9.3-57 to 6.4-40).

At 3/4 time we were 2 points behind, but kicked 4:1 in the final quarter to secure a great victory.

Midfielder Taylah Tysoe was a standout, playing her best game for the club. The ever reliable Sam Baisas was also very good, but suffered an ankle injury right at the end of the game, so will be in doubt in the coming weeks. There were so many good players it's difficult to single out the other better players.

The Reserves were very brave but could not hold out the fast finishing Monash Reserves team.

Georgia Reed continued her good form with an outstanding game.

This coming weekend both teams with be up against Fitzroy FC at the delightful Ramsden Oval next to the Yarra in Clifton Hill. Reserves at 12noon, Seniors at 2pm.

The photos are courtesy of Senior player Sarah Collins who had her camera out taking pics of the Reserves prior to her game. We put together the montage of Captain Jemima Savage and Elise Thompson. The huddle is the Senior group prior to their match.

Well done girls you are all doing the club proud.

Fins up and GO SHARKS!