Seniors Return to Form with a Brilliant 3rd Qtr Surge 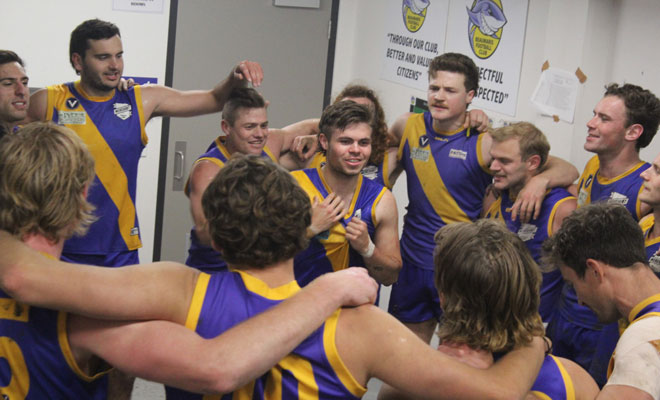 Our Seniors found their early season form with a dominant 7 goal 3rd quarter performance over Fitzroy FC on Saturday, inspired by a 3 goal spurt from captain Matt Petering and the return of full forward Joel Cusack (5 goals), who had been unavailable due to injury for 3 weeks. Final scores BFC 16.13-109 – Fitzroy FC 7.11-53.

The team played smart footy on our big ground utilising speed out of the backline, with the wind also having an influence on the scoring ends - 11 of our 16 goals were scored at the Northern end.

The back six all made a significant contribution to the result (C. Linehan, J. Taylor, M. Rothberg, J. Nardino, J. Trew and S. Gower), restricting Fitzroy to just 3 goals with the wind. Playing more out of midfield, Chris Grigoriadis and Lewis Diggins were also outstanding as was central ruckman Chopper Heath.

Some special milestones to mention – Will Skinner playing his first Senior game up from the U19s, Cal Linehan and Sam Gibbins celebrating their 100 senior games for the club and Tom Spencer recording his first win as a Senior player. Congratulations to all four boys.

Earlier in the day the Reserves came from 14 points behind at Three Qtr time to squeeze out an exciting 3 point win. In the final few minutes, it was like defending the Alamo with Fitzroy throwing everything at us with all 36 players within 60 metres of their goals. A great defensive mark on the goal line by Cooper Ryan and a brilliant out of the pack mark in the last seconds by veteran Sean Coote saved the day. Outstanding for the match were Lachlan Tedde, Damien Johns (returning from injury), Mitchell Scott, Coote and other stalwarts Nick Loucaides and Mick De Fontenay.

Well done to both teams on their impressive wins.

This coming Saturday we will be up against Old Carey at the Carey Sports Complex.