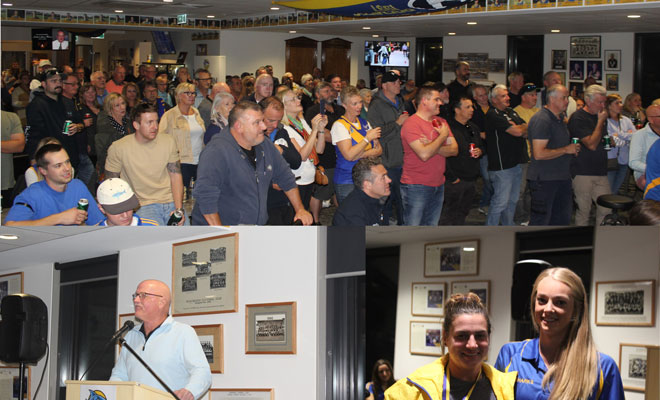 The Beauy community farewells a departed BFC warrior in style.

Last Saturday night the Beaumaris Football Club and the Wearne family combined to pay tribute to the late Mick Wearne, a BFC Life Member who passed away during last year’s lockdown.

The farewell coincided with the two BFC Women’s matches against Old Geelong at Oak St. The Seniors having special significance because it is captained by Mick’s daughter Dani.

The final result of the Seniors game may not have been what we had hoped for, with Old Geelong winning by 7 points, but it did not diminish the occasion, which was to honour Mick and his legacy. Former Club President Garry Nicholson spoke of Mick’s playing days with reverence and admiration and the number of people in attendance was testimony to Mick’s social footprint.

The Club honoured the day by awarding the ‘Mick Wearne Medal’ to the best Beauy player as adjudged by the coaches. Dani Wearne presented the medal to an emotional Milly Bartlem.

The game itself was hard fought and anyone who may have thought Womens footy lacks toughness, only needed to see this game to be convinced otherwise. It was tough in every respect!

Our girls will rue some missed opportunities in the first half, but no one will question the spirit and determination in which they played the game. A close 2nd to Milly in the votes was Taylah Tysoe, who was fearless all game.

It was a game of two halves with our girls dominating the first half and the reverse happening in the 2nd half. Final scores: Old Geelong 6.2-38 def Beaumaris FC 4.7-31

Here are some action photos and some photos of the tribute post-match.

Here’s to you Mick, one of our best!