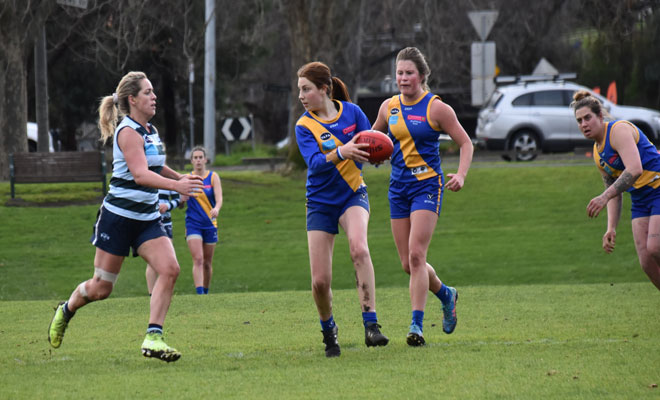 In the Women’s games, the Seniors defeated Old Geelong 5.4-34 to 4.1-25. Former Club Champion Nadia Eldred who was best on ground, came off a difficult week with the passing of her grandfather. It felt like she was inspired.

Offering great support was Simone Marinelli (with 3 goals), Sam Baisas, Sarah Collins, Deb Jarvis, Ella Southgate and Pip Atkins. Easing her way back from an ankle injury was Captain Dani Wearne who started at full forward but ended up playing a key role at centre half back. She was well supported by other key defenders Zoe Larrieu and Alana Gadsby.

Special mention to U18 players Portia Ronsberg and Abbey Tankard who played their first game in the Senior team. Congrats girls.

In the Reserves, Ally Gilchrist made her long awaited return from injury and kicked 3 goals in the process. Alana Hilford showed what a valuable player she is with a fantastic four Qtr game. Other best players included Jemima Savage, Mikala Clarke, Holly Lance, Hannah McNamara and Poppy Ward. Also, great to see Loz Haringsma back!

This coming weekend is a bye round for all teams. The Women’s teams come back on the 14th with the U19s and Senior teams the following week.