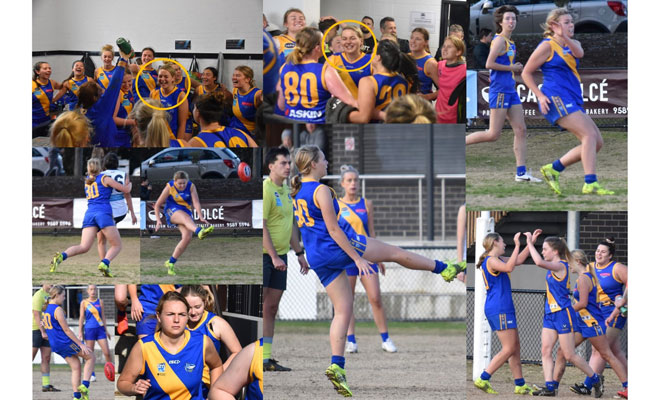 It’s not everyday someone kicks 9 goals in a game for the Beaumaris Football Club, but on Sunday in the Under 18s Div 1 Girls game Versus East Brighton, full forward Portia Ronsberg did exactly that.

We suspect it may be a club record score by a female in any game at the Beaumaris Footy Club. Certainly, the equal of any such achievement.

In the 2 weeks previous, Portia was asked to play Senior footy, which she did on June 26th with the Senior Reserves, then the following week she was elevated to the Senior Womens team. After a great win against Old Geelong, she was water showered with U18s team mate Abbey Tankard, being new players in the team in the post-game club song celebrations.

Next week Portia will celebrate her 100th game milestone having started her footy career at the BFC in 2013 in the Under 9s playing with the boys.

Talking to Portia today, she indicated that the 2 weeks playing Senior footy primed her for last Sunday’s game, that playing on top level defenders was a real eye opener and a learning experience.

In terms of her future Portia would love to see a premiership for the U18s and more games in the Senior team. Well, that’s a given!

For someone who won’t be 18 until next year, the future looks very exciting for Portia Ronsberg. A BFC star of the future.

Portia, congratulations on your 9 goals!