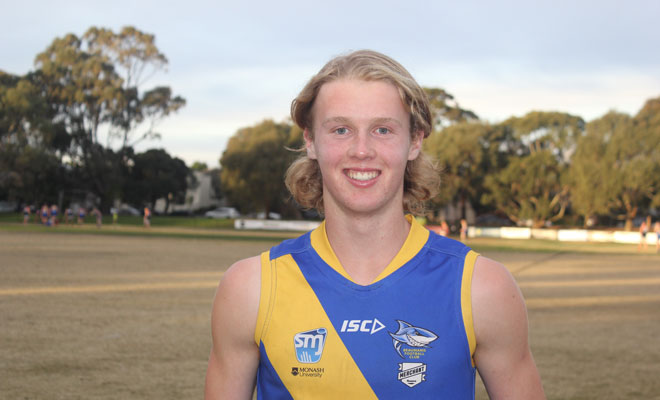 This is a great endorsement of the BFC Junior program.

The rep season for both age levels has been disrupted by lockdowns, although the U17s Game 1 resulted in a good win for Vic Metro. Final Scores: Under 17s VIC METRO 12.8 (80) defeated VIC COUNTRY 7.4 (46)

The Under 19s program has essentially been moved to the end of the season due to the restrictions on movement around the country.

On Sunday we caught up with Cam Mackenzie who had just come off that successful game for Vic Metro. He was at Oak St to support his BFC U17s team-mates.

In terms of background, Cam is 17 years old and is doing year 11 at Brighton Grammar. He started playing for the Sharks in the Under 9s back in 2012. From the age of 13 Cam has been selected in AFL rep teams for his age. Despite his regular absence for rep footy, Cam has amassed 91 games for the Beaumaris Football Club, from the U9s through to the U17s (U16s year lost to covid). He has kicked 59 goals for the BFC, including 19 in his U15s year playing in the midfield.

In 2017 Cam was part of the BFC Under13s team that won the SMJFL Premiership. At the team presentation night he won the award for for best finals player by coach Craig Phillips. (pictured)

Cam is a tremendous young man and we wish him all the best for the future.