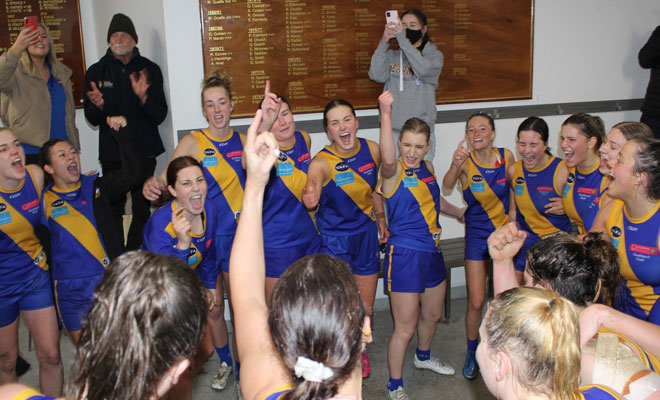 Senior Women hold on for a brilliant Semi Final victory.

Last Saturday our Senior Womens team held out a fast finishing Fitzroy FC to record an historic victory at home in the Womens Premier B Semi Final.

It was a game where the weather dictated proceedings, dry and fast in the 1st half, then wet and slippery in the 2nd half. At three quarter time our score was 5.7-37 and it remained that way for the duration of the 4th, but it was enough to see out the win, albeit by a solitary goal.

Two critical goals in the 3rd Qtr gave us the buffer to grind out the win in the pouring rain. It was a gutzy effort by both teams.

In the first half, before the rain, our top of the ground players such as Sam Baisas, Nadia Eldred, Simone Marinelli and Ash Van Rooyen, were outstanding, then when the rain came and it became a slog, the ‘in and under’ players such as Millie Bartlem, Beth Hearn-Amy and Jamie Bond rose the occasion, fighting for every possession. Special mention to the back six of Pip Atkins, Alana Gadsby, Zoe Larrieu, Calley Ryan, Emily Van de Water and Deb Jarvis who were incredibly solid as were Sarah Collins and Sienna Tedde in the ruck.

Credit to all players for an amazing effort.

Next weekend we will play Old Geelong in the Prelim final on Saturday @ 3PM at Trevor Barker Oval.

Well done to the BFC Senior Womens Team on an amazing win.