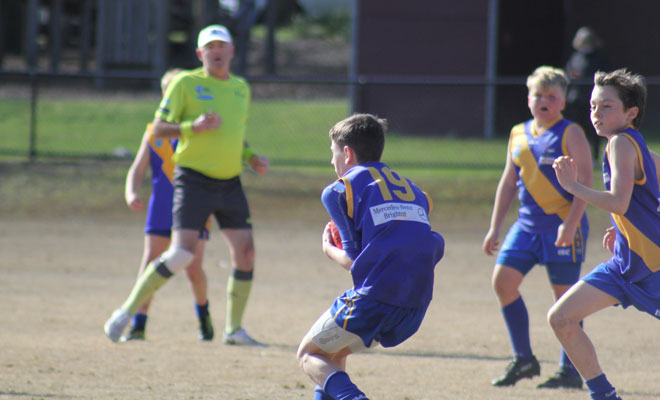 Around the grounds recently we ventured down to Peterson Reserve for a look at a couple of our ‘Great Whites’ teams.

Firstly, the U13 ‘Great Whites’ boys delivered a hard-fought, thrilling win against St Peters. In the end it was only a 2-point margin. Final score BFC 4.1-25 def St Peters 3.5-23.

Wayd Goldsworthy and Ethan March each kicked 2 goals. Better players included Wayd, who finished the game in the backline and was tremendous, Kaelan Balpe-Leahy and Ashton Hyland.

The boys currently sit 2nd on the ladder, so they’ll be hoping interruptions to the season are kept to an absolute minimum, so they can play finals footy.

On what we saw on Sunday, if they’re given a chance, they’ll be right in it.

On the upper level at Peterson the U12 girls were brave but went down narrowly to Prahran FC. The girls sit just outside the ‘four’. They played with great enthusiasm and never gave up. True Sharks!

Special thanks to coaches Ben Roberts, Damien March, Tim Holt and Team Managers Fiona Hickey, Ingrid Edel and Liza Thompson for their ongoing hard work with both these teams.