Motherhood and the Coach 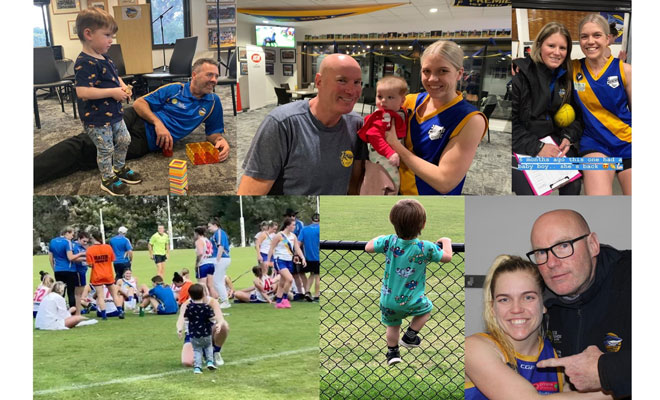 Motherhood - the trials of a women's team coach.

Being a good coach is about many things, understanding the nuances of your players is just one of those things.

The evolution of women’s footy brings a whole new aspect to that dynamic. One of those things that require a bit more ‘outside the square’ attention is dealing with pregnancy and early motherhood.

The BFC is certainly not the first or indeed the only club to face these challenges, but it does take a shrewd coach to recognise and respond to those challenges.

For our Senior Women’s coach Brent Ward, the idea of one of his best players getting pregnant could have been met with a certain amount of anguish, but not Wardy when it came to supporting key defender Alana Gadsby. He was the first person to encourage her return to footy when it was physically possible and to manage those expectations according to what was practically viable.

So when Alana’s son Hartley was born they mapped out a plan to include footy for a brand new Mum. For example, Wardy would rotate Alana before half time so she could get extra time to pump her milk before the second half started, or Hartley would be waiting to be breastfed as soon as the final siren sounded - so she would be delayed to the post-match.

Coming late or leaving training early was something Coach Ward also understood. As a father to three daughters, Wardy never overlooked Alana as a mother, breast feeding her baby and managing all the requirements of early motherhood. And he did it without fuss or bluster.

Brent Ward has one of the biggest roles in the club. He’s not just a guy leading a group of young women, he’s their confidant and supporter. Sometimes that can be tough when it comes to selection and appraisal, but from our current perspective, he’s certainly the right person for the role. Let’s also add the great support Wardy gets from Daz, Craig, Maz, Mams and Team Manager Alex Byrne.

The Senior team was meant to play their preliminary final last weekend, but that didn’t happen and it won’t happen this weekend either. We just hope the girls get to play out the season so they can have a crack at a premiership.