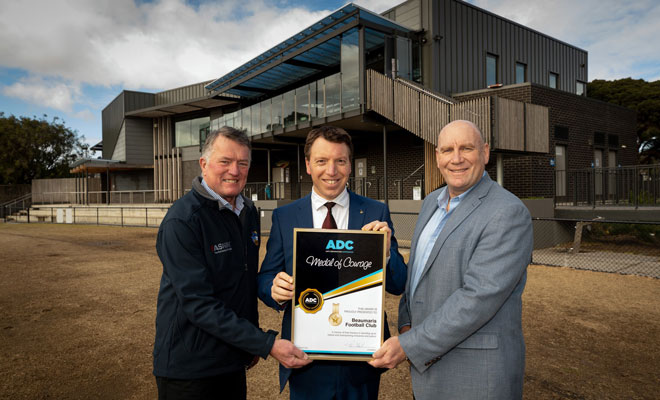 Recently the BFC posted a story in support of the Ajax Football Club after its club rooms had been defaced with racist slogans and images.

Club President Terry Lucas felt it was time to act and make a public stand against bigotry and marginalisation after receiving an impassioned call from BFC U19s coach Michael Schmerling, himself a former Ajax player.

The post was shared by parliamentarians, community leaders, sponsors, players and parents. Importantly it came to the attention of Jewish families with children playing footy for Ajax. For them this was an important moment of ‘extending hands’ beyond prejudice and intolerance.

At a Juniors game between the two clubs, BFC Juniors President Nicki Spencer was hugged by an emotional Ajax parent, thankful for the show of support.

The post was then bought to the attention of the Anti-Defamation Commission (ADC) who deemed the stance was worthy of the prestigious ‘Medal Of Courage’ award. As a testament to their standing, the ADC Council of Advisors has included two former Australian Prime Ministers, and two former Governor Generals of Australia. For 41 years, The Anti-Defamation Commission (ADC) has been Australia’s leading civil and human rights organisation, combating all forms of hatred as well as promoting justice for all.

Past recipients of our awards include Jessica Mauboy, Lisa Wilkinson, Travis Varcoe and Bachar Houli to name only a few.

“The Beaumaris Football Club stepped up when it mattered and showed that they were much more than an incredible sporting organisation. In using their moral voice to confront this ugly expression of hatred head on, they proved that they are inspirational champions for empowering youth to stand up against antisemitism and bigotry. Their courageous stance reminded us that grassroots groups possess the power to not only break down religious and ethnic barriers, but to promote equality and mutual respect from the playing field to the classroom. The ADC is proud to partner with the Beaumaris Football Club in combating hate, bullying and discrimination in our society and to build a better Australia.”

In accepting the award President Terry Lucas said he was, “humbled and proud to receive such an honour on behalf of the Beaumaris Football Club. Prejudice and racism have no place in society, let alone sport. Our club stands firm in upholding high moral values and the promotion of equality, unity and respect.”

Pictured here at the award presentation prior to lockdown is Dr Dvir Abramovich with Terry Lucas and Peter Caswell from the BFC.