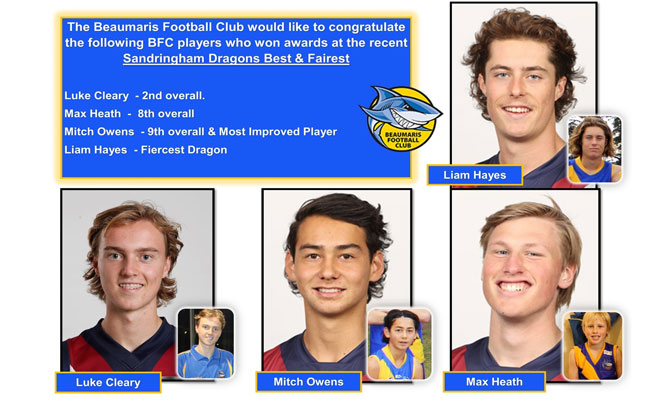 The BFC has long history of success with players who gravitate to the Sandringham Dragons and go on to play footy at the highest levels.

In recent years AFL players such as Tom Lynch, Jack Gunston, Jack Scrimshaw, Oli Florent, Hayden Mclean and Joel Amartey have all come through the Dragons after decorated Junior careers with the BFC.

The Dragons play in the NAB League, an elite Under 18s comp set up by the AFL, but extended to Under 19s for the Covid interrupted years. When the 2021 season came to a halt after 11 Rounds, the Dragon sat at the top of the League ladder.

At the recent awards announced by the Dragons several BFC boys were amongst the winners:

All of these boys have been part of the BFC Juniors for many years. Juniors President Nick Spencer was very pleased with the result and lauded the “values and strength” of the BFC Junior football program and congratulated all BFC boys in 2021 Dragons U19s squad.

When not playing for the Dragons and where possible, most of these boys played for either the U19s or Senior forty for the BFC in the shortened 2021 season. As they say, ‘Once a Shark, Always a Shark’.