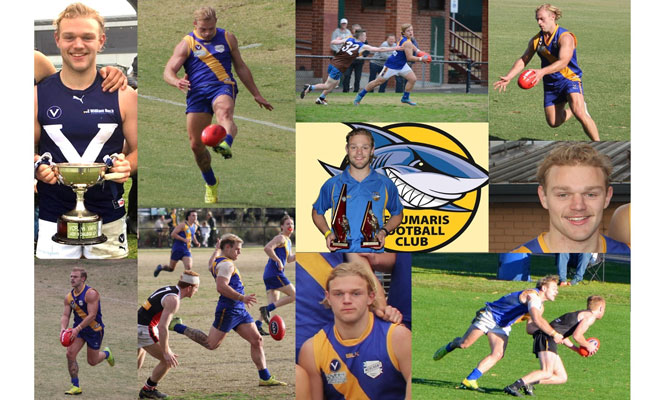 Congratulations to BFC’s own Lewis Diggins who took out VAFA’s Premier B Best & Fairest award on Wednesday night. Lewis shares the award with Old Haileybury’s Brede Seccull, both finishing together on the votes ladder at the completion of counting.

Lewis, or Diggo as he is more commonly known as, has being a staple at the club since 2008, starting in the Under 9s and progressing all the way through to the Seniors in the 2017 season, making his debut as a 17 year old. In all he has played 189 games for the BFC, an extraordinary accomplishment for someone who has just turned 22 and missed a whole season last year due to Covid.

In 2018 Diggo won the Club’s time-honoured Mick Kirkby Best & Fairest Award, an outstanding achievement for such a young player becoming one of the youngest players ever to be anointed Club Champion.

In 2016 Lewis was part of the all-conquering U17s team that won the SMJFL Div 1 Grand Final. One of the strongest Junior teams ever assembled at the club.

The following year as an Under 19s player, Lewis was best on ground in an epic losing Grand Final to Old Xavs. Since then, Diggo has been a constant in the Senior Mens team. He has also been a regular member of VAFA’s rep teams.

He is known for his enormous fitness regimen and his professional approach to the game. Often playing off half back, Diggo plays with intensity and skill. When needed he gets puts his stamp on the game in midfield, competing for the ball with power and resolve. He is also a ferocious tackler. It would be very difficult for the umpires to miss him.

Lewis joins elite group of six Beaumaris footballers to have won Senior Competition Best & Fairest Awards over the past 59 years.