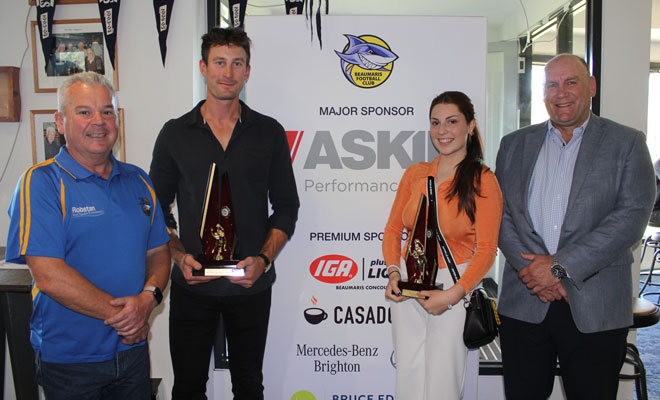 The BFC held its Best & Fairest awards at the club yesterday afternoon. After the non-event season last year, it was tremendous to finally recognise the best of our seven Senior teams for the 2021 season. It’s fair to say that our Senior Men’s and Women’s teams and the Men’s Reserves were all incredibly well placed to win premierships this past season only for the season to be shut done due to covid restrictions. It was a great tribute to the players and coaches to be in such strong positions at the enforced end of the season.

In terms of the awards, Scott Gower picked up his 2nd Mick Kirkby award for Club Best & Fairest. He had previously won the award in 2017. In presenting the award Head Coach Bluey McKenna praised Scott for his outstanding defensive qualities, always playing on the oppositions best forward and being the pillar of a defensive unit that was the best in the League.

Scott has played an incredible 195 games for the Sharks starting in 2008. He was an integral part of the 2016 Premier B Grand Final winning team captained by Tom Dean.

The Senior Women’s award was won by another gun defender, Caley Ryan. Although only 18 years old, Caley played liked a seasoned veteran picking up votes in almost every game. She stands out because of her selfless and fearless approach to footy, routinely calling out to other players, shepherding and taking numerous intercept marks.

The Damien Guidolin Under 19s Premier Best and Fairest was won by Kye Turner. Kye is a leading forward who uses his pace and height to advantage. Kye has been with the club since 2010 starting in the Under 9s. He has played 128 games for the BFC including the 2017 U15s Div 1 Grand Final win against East Malvern. What a day that was, the Sharks winning 18.7-115 to 6.10-46. That team was coached by Stu Spencer.

Other major award winners included Cal Linehan who won the Tim Russell ‘Mateship Award’ and Simon Crompton and Jane Lapa who shared the Steve Caffyn award for their incredible work around the club.

The Reserves B&F’s were won by Alex Johnstone and Baillie De Klijn respectively, with the Thirds going to Andreas Baruhas. Gabe Finnegan won the Under 19s Reserves B&F.

Congratulations to all the winners.

SHARK OF THE YEAR - ELLA SOUTHGATE

SHARK OF THE YEAR - HOLLY LANCE