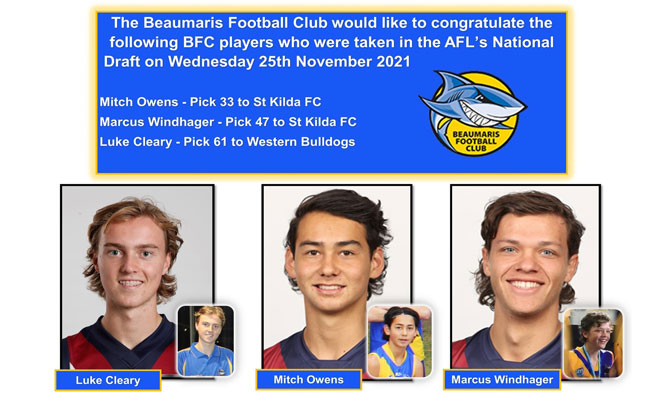 2021 – a tremendous year for BFC players in the AFL draft - three players picked up in AFL draft.

“We are absolutely thrilled for Mitch, Marcus and Luke and their families. Their drafting is very much deserved and a great credit to their persistence and ability to deal with adversity. Marcus has had to deal with a knee reconstruction at a young age, Mitch has had to learn to play a big man’s game after a huge growth spurt and Luke has had to adapt after playing very little footy for the last two years and still stay focussed and committed. Luke played two senior games with the Sharks this year. I know the Cleary family well and I’m delighted for them.

It’s a significant achievement when you consider only 60 players from across the country are drafted, and three came from our club. This in addition to Jacob Edwards and Max Heath who were recruited in the mid-season draft. That’s 5 players from our club from about 80 drafted. Quite extraordinary really.

It’s a great credit to our junior program and everyone involved in it. Most importantly it’s a significant reward for the boys themselves and it’s great that they are all at local Victorian clubs. We have a large St Kilda supporter base at the Sharks so everyone will be thrilled that Mitch and Marcus are joining Max Heath at the Saints. We also have a soft spot for Max King, son of former BFC player Brook.

After a tough couple of years with Covid it’s nice to have some positive news. On behalf of the club we sincerely congratulate Mitch, Marcus and Luke and wish them all the very best on what promises to be a very exciting future.”