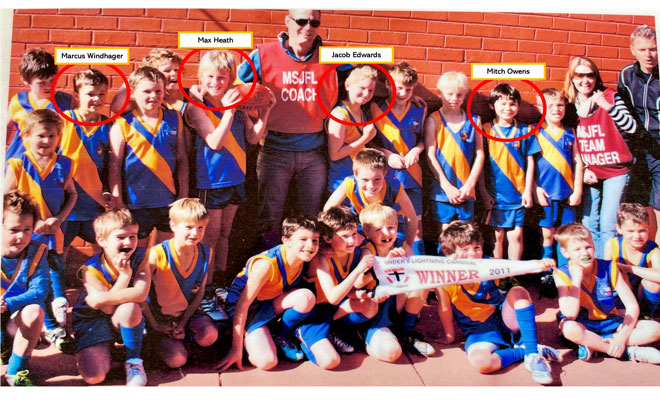 In what’s been a tremendous year for the club in terms of our AFL draftees, it’s great to reflect on where things started.

For 4 of the 5 draftees, it began in the Under 9s back in 2011, in the one team. Those boys are Marcus Windhager, Max Heath, Jacob Edwards and Mitch Owens and they are pictured here after winning the 2011 Under 9s Lightning Premiership.

On the draft night coverage on Fox Sports, the commentators referred to the Beaumaris Football Club as an ‘AFL nursery’.

It’s a tribute to all the coaches and staff who work so hard to give every player the opportunity to succeed. A key part of this is our Junior Coaching director Stephen Nash who has promoted for many years an inclusive skills program that is first and foremost (kicking, marking and team drills).

During the week, respected journalist and broadcaster Jon Anderson referred to the BFC as a ‘football factory’. But it’s all about great coaches, top administration, and a realistic footy program that provides an opportunity for ALL players.

Thanks to Nicki Spencer, Stephen and all the Junior Coaches and Team Managers who make it possible to have 5 AFL draft picks in one year.

FLASHBACK: The 2017 Under 15s Division 1 Grand Final. After scraping into the finals with a 7/6 record, the BFC boys surprised everyone with two stunning semi-final victories. Making it to the Grand Final they were underdogs against a red hot East Malvern. Final score: East Malvern 6.10-46 - BFC 18.7-115.

Once a Shark, Always a Shark.

Fins up and Go Sharks!