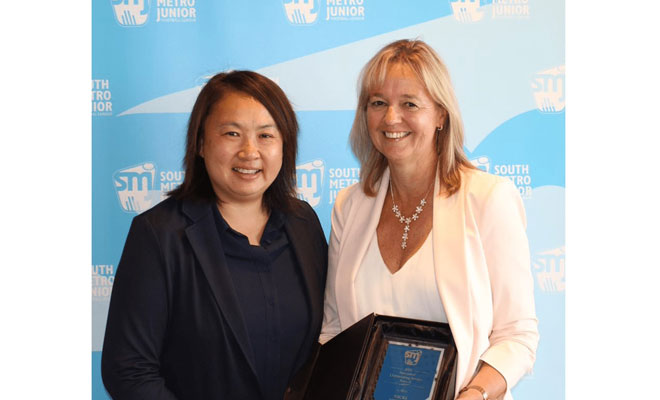 Outgoing BFC Juniors President Nicki Spencer was acknowledged by the SMJFL on Wednesday for her incredible contribution to Junior footy by being awarded the Inaugural 2021 ‘Outstanding Service Award’.

SMJFL CEO Sarah Loh, in presenting the award, praised Nicki for her enormous service to the Beaumaris Football Club and to the SMJFL over many years.

Nicki has been involved with the BFC for just under 20 years. She’s undertaken every possible volunteer role at the club with the exception of coaching. She’s left that to her premiership winning husband Stuart.

In recent years Nicki has overseen a magnificent period of growth for our Junior section. This has coincided with a raft of AFL draft picks, rep players and a Senior program dominated by former Juniors.

Through all this Nicki has promoted a Juniors program of inclusion and participation for all players. She has also overseen the phenomenal growth in Girls football.

Nicki is a zealous advocate for the BFC and has vigorously defended her beloved footy club.

In 2018 Nicki was honoured with BFC Life Membership for her long and valued volunteer work to the BFC.

Through all her work Nicki has managed to raise her three boys James, Harry and Tom, all of whom have played for the BFC. Tom is the current Under 19s Captain.

Nicki will continue to serve the club as a member of the Senior Committee.

“On behalf of the BFC I would like to congratulate Nicki on winning this prestigious award. Nicki has been an exceptional servant for the BFC and Junior footy in general. She is a visionary, and the Beaumaris Football Club has been the beneficiary of her foresight, dedication and leadership.

She has been an outstanding Juniors President and I am personally delighted she will continue to make a vital contribution on the Senior Committee.”