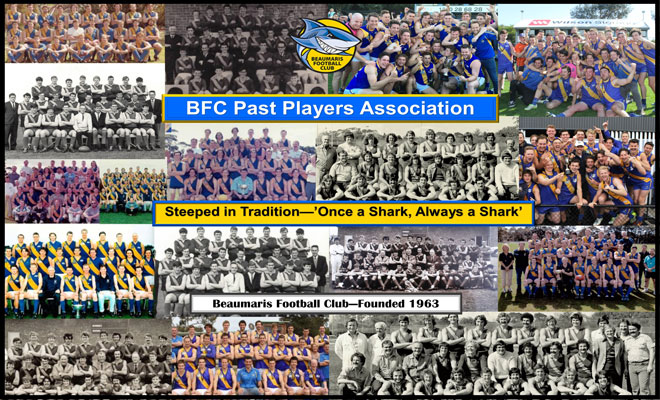 Almost six decades have elapsed since those first four Beauy teams took the field on Sat 20th April, 1963, the week after Easter.

The BFC had been formed at the Beauy RSL and was led by an inaugural group of people who were mainly returned Servicemen & Women from the Beauy RSL. Hence we keep the links alive with our traditional Anzac Luncheon which commemorates the sacrifice made by so many Australians in so many theatres of war.

This Saturday, the first week after Easter, will see the first celebrations of the club’s Sixtieth Year with our Anzac Luncheon held in conjunction with the Beauy RSL. The Reserves and Seniors will be playing another Blue & Gold club, De La Salle Old Collegians. One connection we have with DLSOC is that while leading the Beauy U/17 teams in 1963 & 1964, De La Salle student, Mick Kirkby, won the competition Best & Fairest in both seasons, with future AFL star, Alan Davis, runner-up in 1964.

Mick’s Father, Stanley James Kirkby (Jim), was the club’s first trainer and he also became a Vice-President of the club and was made a Life Member in 1976. Mick was made a Life Member in 1980. Jim Kirkby had been wounded in action and captured by the Japanese before being taken back to Japan as a P.O.W. and spent two years in what was virtually a slave labour camp. Immediately after the war he was asked to return to Japan with the occupying forces as a Military Policeman.

We have also been searching for a Guest Speaker with a military background for Saturday’s Luncheon and with the help of Murray Thompson we have invited Sergeant Braedan Heverin, who completed a Tour of Duty of Afghanistan in 2019, to join us next Saturday. Braedan is a local from Mentone and attended St Bedes College and his father and brother are well known sporting identities.

However, in an amazing twist of fate, we were gobsmacked when Braedan also mentioned that he had a strong family connection to the Beauy F. C. as his Grandfather and an Uncle were both BFC Life Members. In fact, he is the Grandson and Nephew of Jim & Mick Kirkby – a fact that was completely unknown to us when we invited him along as Guest Speaker. He can be googled and seen in video talking about how his Grandfather was the inspiration for him to join the Army and serve as a MP.

There are still some seats available with two tables of Past Players already booked in – contact details on flyer below. Please book by Thursday 6.00pm. This luncheon is seen as a major event on the local calendar and will be attended by several dignitaries, including the Federal Member for Goldstein, Tim Wilson. (No political speeches).

11.45am:      To commemorate those historic ties between the Beauy Footy Club and the Beauy RSL an Anzac Luncheon will be held in conjunction with the current Members of the RSL Sub-Branch prior to the clash with De La Salle Old Collegians. While the BFC is well recognized for it’s founding links with the RSL it is often forgotten that during the first decade of the club’s existence we also saw many of our Senior players from the ‘60’s called up for National Service with three of them - Peter Rahilly, Barry Taylor & Garry Forster – also serving overseas in Vietnam. As a feature of this Luncheon we have invited Peter, Barry & Garry to join us alongside other Beauy F.C ‘Nasho’s’ including Mal McLaughlin, Geoff Skinner, Daryl Neal & Richard Murphy. Daryl was also posted overseas in New Guinea during his Australian Army Service. We have also invited other key figures from the ‘60’s including several players from the club’s undefeated’ 65 Premiership team.

To join us please follow instructions re booking and payment.

N.B. The Beaumaris RSL veterans still maintain their 60+ years of tradition by gathering at the Concourse shopping centre before marching to the Cenotaph at the Community Centre for the laying of wreaths on the Sunday prior to Anzac Day. This year they will be marching on the 24th April at 2.45pm.

6.30pm:        Covid delayed Reunion Dinner in the rear Banksia Room for the 2010 Senior Premiership team – celebrating their come from behind 1 point victory. Dinner is $40 a head: contact Ron Nicho on 0416 133655  if interested in coming along and hearing some Tall Stories told.

This will be a very significant day for the club and brings together many generations representing most eras of the club – we hope to see you all there.

The next major function will be the Life Members and 100 Games Dinner on Sat 21st May.

We were saddened to hear the news that long-time supporter and sponsor of the Sharks, John Tilley, passed away on Easter Sunday after a long battle with cancer. John has been involved with the BFC for many decades and has many good friends amongst our members. He was also very generous as a sponsor of the club through thick and thin and his pleasant personality will be missed by all. We pass on our condolences to Julie and his family.

Good Start for the Sharks

After some tough contests over the first two rounds, it is pleasing to have the Senior Men’s, Senior Women’s and U/19 teams all sitting 2-0 going into the Easter break.

In Round 1 the Seniors hung in tough as Fitroy, at the historic Brunswick Road Oval, threw everything they had at them in the second half after Beauy had kicked 8 straight till half time. A great Senior debut at full-back from Liam Hayes up from last year’s U/19 team while two more youngsters, Tom Spencer & Will Skinner, are both in good form. At the other end of the age scale, we have seen two veterans head the goalkicking in both games – Matt Petering with 3 in the first game and then Rob Cathcart posted 5 against Old Carey. Cal Linehan and Jak Nardino have played well in defence while our tall forwards, Joel Cusack and Sam & Josh Gibbins have all been in good touch. Spread across the mid-field and wings we have consistent winners in Riley Virtue, new skipper Joel di Natale, Connor Murphy & Ben Matthews while Callum Heath takes on all-comers in the ruck.

The U/19’s under new coach, Craig Phillips, have had two come from behind wins which is great for the boys and next week they will head to Mentone for the local derby. There has been an even spread of thirteen goal-kickers over those two games even though Jake Johnson and Seb Stewart bagged four each in the first game. Craig is extremely pleased with the resilience and fighting spirit displayed early this season.

The Senior Women’s team also had to fight for a 2 point victory over Old Haileybury in Rd 1 before an easier win away from home in Rd 2. Great to see the tradition continuing with Nadia Eldred, Granddaughter of our inaugural 1963 President, Peter Eldred, named in the best players for both games.

The Reserves and Thirds team have been undermanned and each have been close to a win in the past two weeks. In Rd 1 the Thirds only went down to St.Bedes/Mentone by four points and in Rd 2 the Reserves got to within four points of Old Carey late in the game. Numbers are expected to increase after Easter.

While putting this article together we had one eye on the Saints/Hawks game as Marcus Windhager was part of the Saints team demolishing the Hawks side which contained two other Beauy juniors – Jack Gunston & Jack Scrimshaw. He becomes the 30th Beauy player to play AFL men’s football after his Sharks’ teammate from the U/9’s through to the AFL, Mitch Owens, debuted in Rd 1.