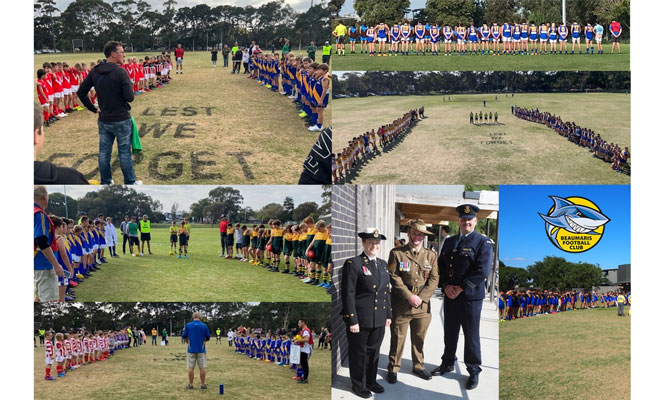 Across the weekend we saw Senior and Junior teams honour the Anzacs.

Teams from the Under 8s through to Seniors lined up with opposition teams as a mark of respect. The Ode was played through tiny speakers in some cases and a minutes silence observed.

At the Anzac Round lunch on Saturday, Sergeant Braedan Heverin, who completed a Tour of Duty of Afghanistan in 2019, provided a brilliant and poignant address to the guests in the BFC Club Rooms. Braedan is a local from Mentone and attended St Bedes College. His father and brother are well known local sporting identities.

In a surprise revelation Braedan also mentioned that he has a strong family connection to the BFC through his grandfather and uncle who are both BFC Life Members, recently deceased.

In fact, Braedan is the Grandson and Nephew of Jim & Mick Kirkby, both legends of the Beaumaris Football Club. In fact, our Senior Men’s B&F trophy is named after Mick. Quite an irony, because at the time of confirming Braedan as the key speaker, we had no idea of the connection.

Guests at the lunch included local Federal member of parliament Tim Wilson and his prominent election challenger Zoe Daniel, who was with her father Peter, a 100 game player for Essendon.

Club historian Ron Nicholson spoke of the strong link between the Beaumaris RSL and the Beaumaris Football club and the role the RSL had in the actual formation of the footy club in the very early 60s. Representing the RSL was Bayside Councillor Clarke Martin.

Now, nearly 60 years on, the Club has gone from strength to strength due in no small part to the resourcefulness and vision of the RSL at the time.

In the photo compile standing next to our very own Jane Lapa, is Sergeant Braedan Heverin and Squadron Leader Jon Hillis.