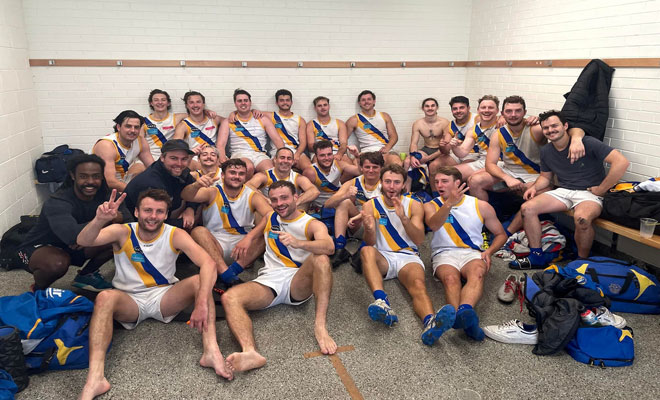 Great effort by our Reserves ensures 5 wins for the 3rd consecutive week.

It was another round to savour with all 5 Senior teams recording wins, the highlight being the tremendous fightback win by our Reserves.

On selection night last Thursday, the team was down to 16 players with flu and injuries hitting hard. On Friday five Thirds players were promoted into the team and consequently missed their Friday night game, Elliot Mathers, Mick Staunton, Josh Lucas, Rob McLeish and Zac Baruhas. A five goal 3rd Qtr set up the win, the final quarter a dour struggle to retain the lead and secure the win.

Club President Terry Lucas, who was running the boundary, called the win “pure grit and determination.” Terry said that he “hasn’t been more excited by a win in a long time.” Tez had a close-up view of his two sons, Matt and Josh playing together, which would have added to the excitement of the win.

The Seniors game which followed wasn’t as close, the guys running out convincing winners. Star of the show was full-forward Joel Cusack who kicked 6 goals with an awesome display of contested marking and goal kicking. The Gibbins brothers Sam and Josh each kicked 3 goals as did Jak Nardino and Connor Murphy. The midfield and wingers played a decisive role in the win with Riley Virtue, Tom Spencer, Murphy, Nardino and ruckman Cal Heath all outstanding.

The Womens team celebrated Sarah Collins 50th with a solid win over Williamstown CYMS at home, with Sam McLean dominating at full-forward kicking 4 goals taking her season’s tally to 22. She was well supported by half forward Rosie Byrne (2) and roving forward Holly Tysoe (1).

Lani Hilford dominated her wing, while midfielders Sam Baisas, Caley Ryan and Taylah Tysoe were persistent all game as was defender Loz Haringsma. In her milestone game, Sarah was tremendous in the ruck. The girls have now won 8 straight.

It was another brilliant win by our U19s on Saturday. The guys had to tough it out against a resilient Mazenod. Matt Harms kicked 4 goals from his forward/midfield role to share best player honours with Oskar Phillips who was tremendous in the ruck all game. Nic Plevritis, Seb Stewart and Seb Zahra never stopped running.

Michael Gori had his head over the ball all game and Lachie Rundmann was strong across half back. Plus, Baxter Pace kicked two important goals. The 19s now sit 2nd on the ladder to St Bedes on percentage and 2 games ahead of third placed Hampton.

On Friday night, the Thirds were runaway winners against Old Ivanhoe. Chris Lawton kicked 4 goals and was one of our top players. Matt Dickinson continued his outstanding form with a best on ground performance. Jack Shannon, Max Adams Nick de Bruin and Jack Murphy all played excellent footy. Hard to select top players when so many stood out. The Thirds now sit in 2nd place on the ladder and look destined to play in the finals.

Outstanding round of footy by our Senior teams – 15 wins from 15 consecutive games.

The main photo is the jubilant Reserves after their great win while the rest are from the Under 19s game.