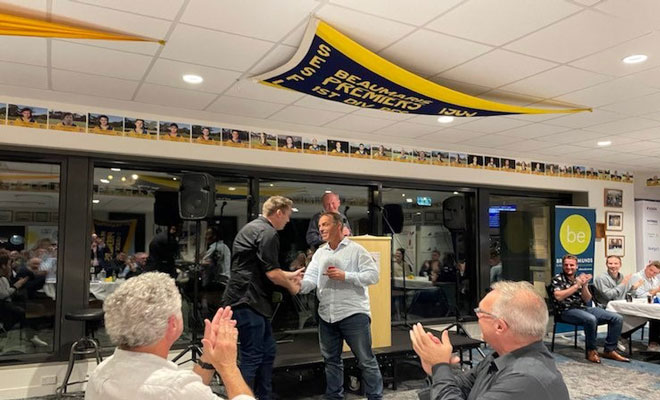 Sean Coote was officially recognised as taking over the title of ‘Most Games Played’ for the BFC at last week’s Life Member’s & 100 Games Dinner with a current tally of 470 games in the Blue & Gold jumper. Sean played 141 junior games from U/9’s in 1990 until the U/17’s in 1999. After moving up to the Senior section of the club in 2000 with the U/19’s he is now in his 23rd consecutive year of Senior footy as a forty-year-old. Last Saturday he played his 329th VAFA game with the Sharks as CHB for the Reserves and with another ten possible games this year he will have to decide on whether the ‘Magic 500’ is within reach.

During his career Sean has also won the Senior B & F Award in 2006 and played in the 2003 & 2010 Senior Premiership teams and the 2016 & 2018 Reserves Premiers. The photo above shows Sean receiving his BFC Life Membership Medallion from Alistair Clarkson at the Life Members and 100 games Dinner

After a three-year hiatus there were four Life Memberships awarded at last weekend’s Dinner and they all had the common thread of recognising the on-field exploits of four Senior footballers who have also contributed to the club in other roles.

As well as his remarkable tally of 470 Club games over 33 consecutive years, Sean has also served on the Senior Committee as the Players’ Representative, worked on several Social Committees and been a member of the Leadership Group of both Senior & Reserves teams.

‘JT’ was well known in the local area as a prodigious talent on the tennis court, but he joined the Sharks in 1982 as a 15-year-old who was eager to give footy a go. He immediately developed a passion for the game and won Best & Fairest Awards in the U/16’s & U/17’s before moving into the Seniors in 1984 where he played until 1997. During that time, he was recognised as having played 200+ Senior games and in 1993 he became only the second Beauy player to win three Senior B & F Awards with the Sharks. In the last game of the 1993 season he played with a diagnosed broken hand and the 3 votes he scored in that match saw him pip another dual B & F winner, Mark ‘Tagga’ Hall, by 1 vote. He also had a stint as Senior Club Captain and made a large contribution as a Coach of various Under-Age teams at U/10, U/15 & U/19 levels for a total of seven years.

‘Sherm’ was an enthusiastic junior footballer who won his first Premiership Medallion with the U/14 team coached by Damien McGrath & led by future international golfer, John Wade. He played Amateur football with his Father Tony’s club, a VAFA Life Member, while completing his accounting studies and returned to the club in 1994 to play under Garry Nicho as a registered ‘Ammo’. (He must have had a crystal ball). Paul immediately fitted into the role as CHB with the Seniors and held that position for over a decade, during which time he became the first Beauy footballer to play in three Senior Premiership teams – ’95, ’97 & ’03. He also became the first Beaumaris Senior player to feature in six Grand Finals. He had several top five finishes in the B & F and played Representative football with the VAFA. In 2006 Sherm put his hand up to lead the first Club 18 team as Captain-Coach for two years and won a club B & F with them as well as being runner-up in the Competition B & F. As well as the 196 Senior games Sherm played with the Sharks he has also been Beauy’s registered VAFA Reserves umpire at times and coached the U/16 Junior team.

‘Marty’ was an avid junior footballer who recalls enjoying watching JT play in the Seniors when he was a young U/10 Sharks player. From an early age he was recognised for his leadership qualities and his hard, committed style of football as a half-back or mid-fielder. He played Representative football during both his Junior and Senior careers and after having a key role in the club’s first U/19 Premiership Team in 1995, under Peter ‘Rabs’ McBrearty, he became a key figure in the Senior team. Unfortunately Chris missed the ’97 Grand Final after having his jaw smashed as he followed the flight of a long ball kicked over his shoulder as he ran backwards into a pack – a typically courageous action. Marty then enjoyed the Grand Final win over Collegians in ’03 when he was in superb form that saw him win the Club Champion Award in both 2000 & 2004 and he was appointed Senior Captain of the club from 2004 – 2006. A great career of 200+ club games and more than 150 Senior games and which he has followed up by now coaching in the junior ranks.