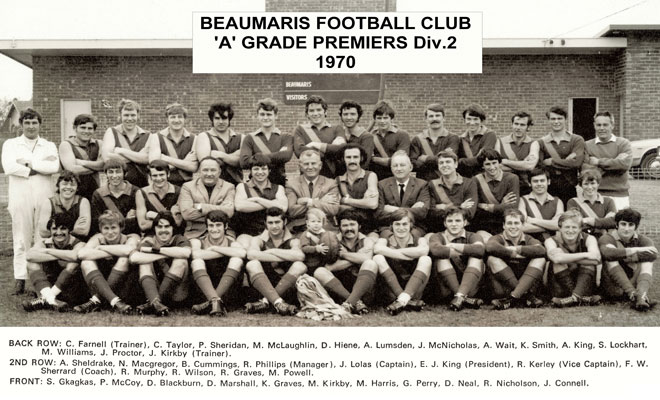 When a young Beauy Senior team headed into the finals in 1970 as the second team on the ladder, the undefeated Dingley team were considered ‘Past the Post’ under the leadership of Ron Corrigan who had been playing for the Bombers the year before. After another four-goal defeat in the second semi it meant that some changes were needed and the fact that the Reserves had drawn the second semi, won the replay and now had a bye on Senior Grand Final day meant that they could bring the Reserves Captain-Coach, Mal Williams, into the team and he was joined by a 16 y.o. ruckman, John McNicholas, from the U/17’s who he would play his first Senior game in the Grand Final.

The team also had a major weapon in Kevin Graves, the super skilled half-forward flanker who topped the competition goalkicking ladder with 75 majors for the season.

Mal Williams at 25 years old was the oldest player in the team with the skipper, John Lolas, not far behind.

The average age of the side on GF day was 19 ½ and Dingley had decorated the Town Hall for their celebrations and already had the Premiership photo taken.

However, coach Frank Sherrard had other ideas and he gave a very calm and considered speech in the rooms about how they could win if they all followed the PLAN.

The boys responded accordingly and another piece of BFC history was created, and which still stands clearly in the minds of all who were involved.

Unfortunately, Mal Williams and Kevin Graves have both Passed Away in the last 48 hours: Mal from a heart attack and Kevin after a stroke.

The 1970 side never had the chance to get together for their 50th Anniversary year reunion because of Covid and it is sad that these two have left us before they had a chance to reunite with old friends.

There will be a lot of people at the game at Oak Street on Saturday when we play our Local Derby against Mentone and with the Past Players Luncheon also being on it means that some members of that 1970 squad have already planned to be at the ground on Saturday, including Marty Harris, who is coming up from Tassie for the weekend.

The Senior Teams will be wearing black armbands for Mal & Kevin and we suggest that anyone who knew either of them might like to catch up for a drink in their memory at half-time of the Senior game (3.00pm). With Kevin’s outstanding career at the Beauy Cricket Club we expect that many BCC Members will join us as well.

(Many thanks to Ron Nicholson)