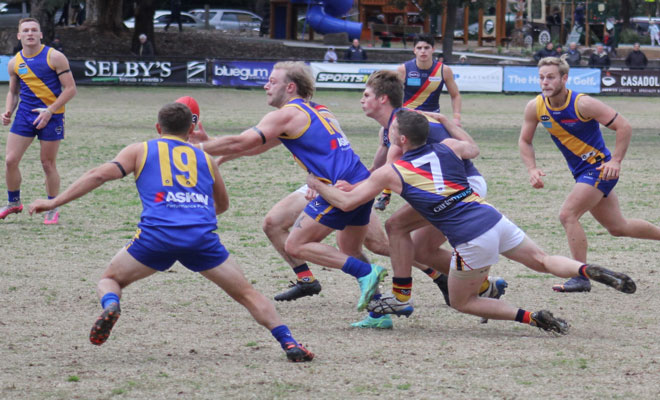 The Future Looks Bright When You’ve Got 20/20 Vision.

It was another tremendous Saturday for our Senior teams with all 5 teams winning for the 4 consecutive week, 20 wins from 20 games.

What we have is two teams on top of the ladder – the Womens and Thirds, two teams 2nd on the ladder the Seniors and Under 19s, with the Reserves in 5th spot on percentage, well and truly in striking distance.

At home the Seniors and Reserves hosted St Bedes and like previous Derbies the vibe was tremendous. The match day lunch was a sell out and the crowd around the ground bristled with enthusiasm. A bunch of our Under 8s were there to soak up the atmosphere and were on hand to cheer the Seniors onto the ground and sing the club song with the Reserves. (the young blokes might have to do some work on the words)

The Reserves got home in a nail biter, while the Seniors accuracy in front of goals rewarded them with a resounding win. Coach McKenna called it the “most complete team performance in 5 years.”

Rob Cathcart (5) and Cal Heath (4) were the main goal kickers.

The Women toughed it out against arch rivals Old Haileybury, it was a one versus three encounter. In the end our girls prevailed, but not without cost, with gun centre half forward Ella Southgate forced out of the game with a nasty injury to her right eye. This was not before she had kicked two important goals. Around the ground Alana Hilford was outstanding.

Going out to play Xavs at Stradbroke Park is never an easy task and the gusty conditions made it difficult for both Under 19 teams. In the end our boys were able to kick three goals in the last quarter to secure the win. Will Skinner and Nate Dear both kicked 2 goals for the match, while Nic Plevritis and Matt Harms played outstanding footy in the tough conditions.

‘Players of the Round’

Click here for more photos from the round 9: https://www.instagram.com/beaumarisfootballclub/