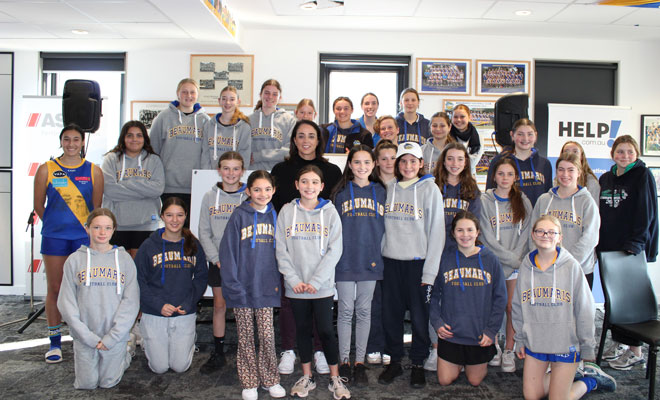 On Saturday the club hosted the head of Women’s football for the AFL, Nicole Livingstone. Nicole has overseen the incredible development of the AFLW since its beginning.

Nicole herself, is a former champion swimmer and a hugely respected broadcaster. She also was responsible for raising funds and awareness for Ovarian Cancer research.

In 2017 she was appointed the Head of Womens football for the AFL, including the AFLW, which started that year.

Nicole is also the recipient of the ‘Order of Australia’ medal.

So it was a tremendous pleasure to have Nicole visit our club on Saturday to speak to both Junior and Senior players.

We had Junior girls from Under 10s to U18s ‘meet & greet’ Nicole. After that, girls from our Senior team and their parents hosted a lunch for Nicole after their game against Old Melburnians.

Nicole spoke about several things including pathways, the importance of Womens football to community clubs, the changing perceptions, and the increased commercial outcomes from the development of girls and women’s football. She also indicted that approval has been given for a considerable financial boost from the AFL to promote the growth of girls footy at a community level. Great news for a club like ours that has been at the forefront of female footy development.

Many thanks to Fiona Love who organised the Junior girls and Senior coach Darryl Behrendorff who posed the Questions for a great Q&A with Nicole.

Special thanks to Nicole Livingstone for your insights and wisdom and giving us your time on a Saturday afternoon.