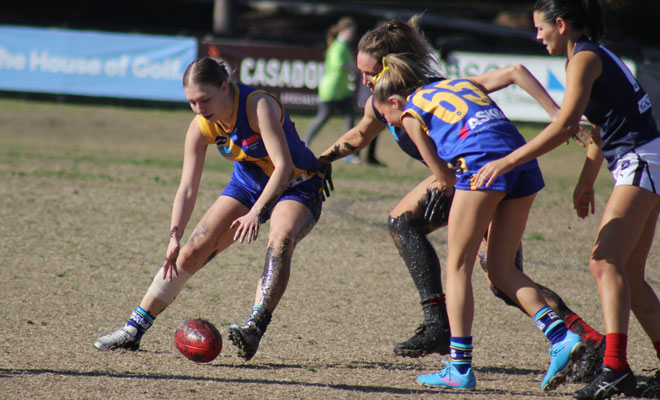 With Round 10 fixtures completed for our five Senior teams, it’s reassuring to see 2 teams on top of the ladder, two holding down second place and one in fifth place on the verge of the four.

The Senior Men overcame a determined Old Haileybury to kick 7 final Qtr goals and run out 20 point winners. At 3 Qtr time it looked like a mountain too high, but inspired by captain Joel Di Natale, the guys lifted in that final Qtr and came home with a wet sail. Other good players included Josh Ward (3 goals), James Taylor, Cal Linehan, Conner Murphy and Chopper Heath.

For first Senior game player Matt Harms, up from the U19s, it was a real eye opener. Matt played mostly as a small forward and acquitted himself well kicking an important goal. Post-game Matt received a good drenching from his teammates, no doubt elated to have forged such an impressive win.

The Reserves didn’t have a good day despite the brave efforts of Cooper Ryan, Dawit McNeish and Jack Murphy and were decisively beaten by Old Haileybury.

Prior to the Seniors game, players from both BFC teams participated in a tribute to Danny Frawley who tragically lost his life three years ago. The tribute was to ensure the continued focus on mental health and well being.

The Thirds, who played on Friday night, won their 8th straight game to remain on top of the ladder one game clear of Williamstown. The guys have become adept at playing at night in the cold and rain. Friday night was no exception. They used the wind to advantage in the 2nd and 4th Qtrs to run out 45 point winners over Collegians. Max Kornberg kicked 3 goals and was well supported by Max Adams, Alex Van Well and Andreas Baruhas.

The Senior Women’s team was missing several experienced players for their clash against Old Melburnians. For 2 quarters the girls seemed flat, however after halftime they stepped up a gear to run out good winners. But it was anything but comfortable against a determined Old Melburnians team. Taylor Tysoe, playing her 100th games across 2 clubs, St Bedes and BFC, was outstanding. She was closely followed by Sam McLean (4 goals), Nadia Eldred, Sarah Collins and Sienna Tedde. Sam has now kicked an extraordinary 27 goals for the season to be the Club’s leading goal kicker at Senior level.

With their win against Hampton the Under 19s look well placed to secure a top 2 position on the ladder at the completion of all home & away games. They currently sit in 2nd spot behind St Bedes, but 3 games clear of Mazenod in third. On Saturday, they proved too strong for Hampton powering home to an 11 goal win. Back in the side, Will Lambert was impressive and kicked 2 goals. He was well supported by Oscar Phillips, Spencer McLennan and Lucas Rowbury.

Players of the Round

Under 19s – Will Lambert

Photos are from the Senior Mens and Womens games.