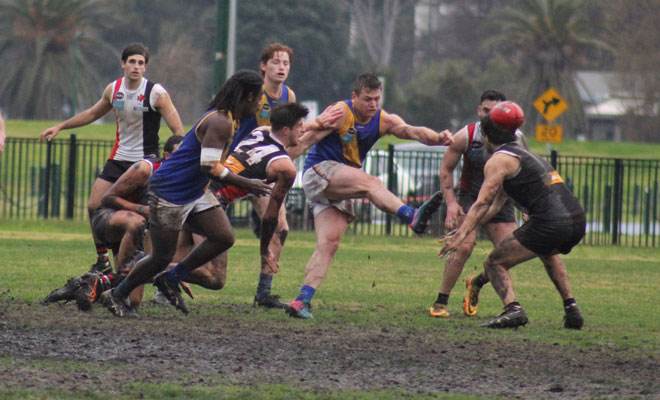 Senior Men cast aside the disappointment of their loss to Uni Blacks with a dominant 4 quarter performance against the Jackas.

It was cold and wet out at Gary Smorgon Oval near the city on Saturday, but it didn’t deter our Senior Men from putting 124 points on the board against AJAX.

It felt like former club champs Matt Petering (3 goals) and Rob Cathcart (3 goals) were determined to conquer the frustration of the loss to the Blacks. Their efforts, along with the toughness of Josh Ward, were inspirational to the largely younger group of players in the current Senior team, particularly with captain Joel Di Natale out injured.

Twin peaks, forwards Sam Gibbins (1 goal) and Joel Cusack (2 goals) were tremendous on the heavy surface, both proving difficult to match up on and were often double teamed.

Winger Conner Murphy continued his impressive season and James Taylor was like a general in defence. Oscar McMaster also had a strong game.

(thanks Bill for your contribution)