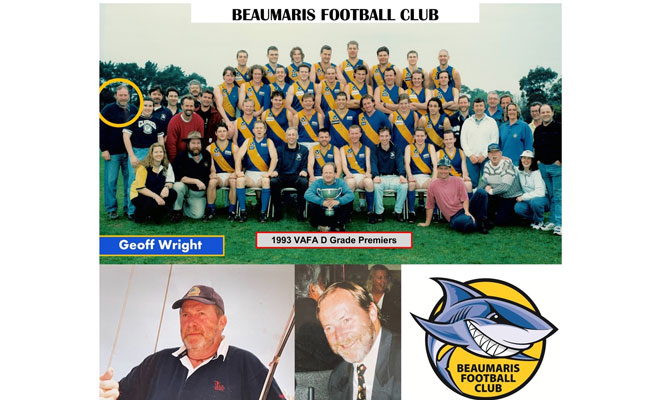 These photos will bring back fond memories to many of Geoff’s old friends from the Beauy Football Club as they recognise him indulging his two passions – sailing out of the Sandringham Yacht Club (wearing his Sharks cap) and at a BFC Dinner Dance when he was the Sharks’ Junior President more than two decades ago.

With four boys in the family of Beauy residents, Geoff & Caroline Wright, it wasn’t long before they joined the Sharks family when the oldest son, David, kicked off his junior footy career as an eight year old in 1978 and he was to be followed by Anthony, Peter & Joey in the 1980’s. Geoff was always one who put his hand up to help out where needed and from roles as a team manager and the Friday night raffle at the Beauy pub he graduated to the position of Junior President in 1992, ’93 & ’94. His philosophy was that ‘you had to put in no matter what the situation was’ and he believed that ‘you got more back than what you put in’.

The boys accumulated several junior premiership medallions over the journey and David was a Senior Premiership player in 1995. Geoff, Caroline (Dec) and daughter Suzie, were always enthusiastic supporters of the boys’ teams and the club in general and Geoff loved having the Beauy Football Club as part of his life and he made many life-long friendships over his years of involvement with the club.

As well as his involvement with the Junior section of the club, Geoff was always proud of his role as one of the five BFC Executive Members who met the VAFA Board in November, 1994 for the initial discussion regarding the BFC applying to join the VAFA competition for the 1995 season. As a younger man Geoff had been involved at Old Brighton F. C. in the ‘60’s and he believed that joining the ‘Ammos’ was a good move for the club.

After twenty years of rolling his sleeves up and ‘putting in’ Geoff was awarded a Life Membership of the Beaumaris Football Club in 2000 and he has been a regular attendee at the club over two decades. He was a quietly spoken gentleman who will be sadly missed, and we pass on our condolences to his five children and their families and the extended Wright family.

Details of Geoff’s Funeral & ‘Celebration of Life’ are listed below.

Please feel free to attend either or both of these ceremonies.

The Wright Family would like to extend a warm invitation to all of Geoff’s friends to join them in the Port Phillip Room for a Celebration of Geoff’s Life by “sharing some stories amongst friends and family over a few beers, just as Dad would have wanted”.