Senior Women Through to Grand Final 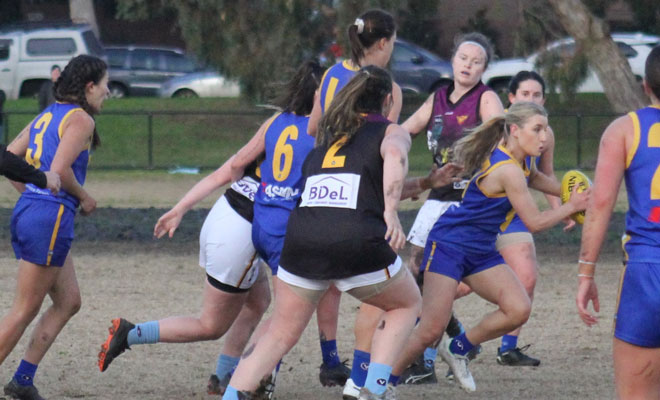 It was gripping battle between two evenly matched teams played under lights at Oak St. In the cold and windy conditions scoring was difficult, it was also a game played at such an intense level. Every possession countered as players from both teams threw themselves at the ball.

Forays deep into the forward 50 of both teams were scarce. It was as much a tactical battle as it was a physical battle. Midfielders Caley Ryan and Sam Baisas were forced to play back up across the half back line as interceptors, particularly in the last Qtr. Both these girls had tremendous games.

Loz Haringsma, Emily Van Der Water and Steph Warmuz were inspirational in defence. Regular ruckman Sarah Collins played mostly in the defensive half, consequently Sienna Tedde did much of the ruck work and was outstanding.

Our two gun forwards, Sam McLean and Tarryn Hurst didn’t see much of the ball, Sam being double-teamed for most of the match. However both players helped assist in all 3 goals scored.

In the end we scraped home by 6 points. On reflection, Haileybury probably forced us into playing within their game plan, which was a credit to them, but our method of combatting that objective was equally impressive.

In tense semi-final footy it’s about getting the win, not necessarily what the game looks like. This was one of those games.

Well done girls, the big prize is the next hurdle.