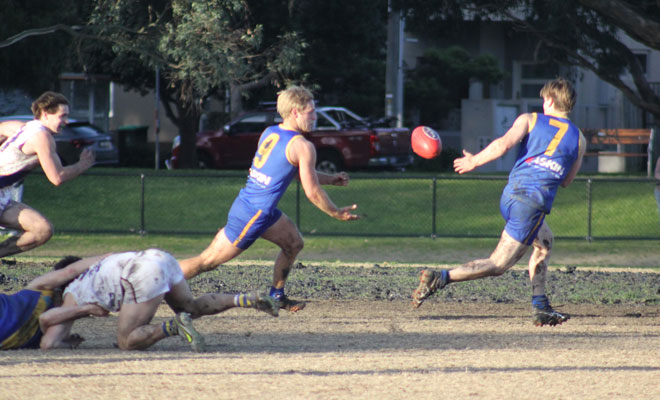 For Mick De Fontenay, playing his 250th game in the Senior team was a tremendous reward for many years of magnificent service to the club.

In recent times Diff has taken on the role as Reserves captain, however on Friday he got the call up to the Senior team, which would make his 250th Senior level game even more memorable, particularly playing with long time team mates, Matt Petering and Rob Cathcart.

The game itself was one of two halves, Williamstown leading at the main break by 19 points after a lack lustre performance by our guys, who kicked just 2 goals to that point. Needless to say Coach Guy McKenna was not impressed.

After halftime a different team appeared kicking 15 goals to 2 in the 2nd half, eventually running out comfortable winners by 70 points.

Although this game was all about Diff’s 250th, there was concern for Josh Ward who suffered a badly broken finger during the game. We wish Josh a speedy recovery.

In other games, The Reserves kept their finals hopes alive with a good win over Williamstown, Jack Gabron Uhe and Luke Kemelfield kicking 4 goals a piece. Best on ground Matt Lucas chiming in with 2 goals.

In other games the Thirds suffered a surprising loss away to St Bernards, while the U19s suffered their 3rd loss of the season against a committed Hampton Rovers.

Players of the Round:

Next weekend the Thirds will play Williamstown in the major Semi for the right to play in the GF. (venue tba). The 19s will be looking to regain form against Uni Blacks at home, while the Seniors & Reserves head out to Old Carey. The Women have the week off.